On August 13, 2008 we picked up our new sailboat in Exuma, Bahamas and sailed it to North Carolina – just a few days ahead of what was soon to be Hurricane Fay. Helping me crew were my long-time friend Fred Burke, and my daughter Trisha. We had just enough time the evening before to put fuel and provisions on the boat. Fortunately, the boat came with pretty much everything you need to conduct a blue water passage. You can download this KML file

to see GPS tracks (colorized by speed) with placemarks identifying significant events (such as raising sails, fishing, being boarded by the US Coast Guard, etc.). Read on after checking out some photos and video clips (these pics are also geo-tagged in the KML file): 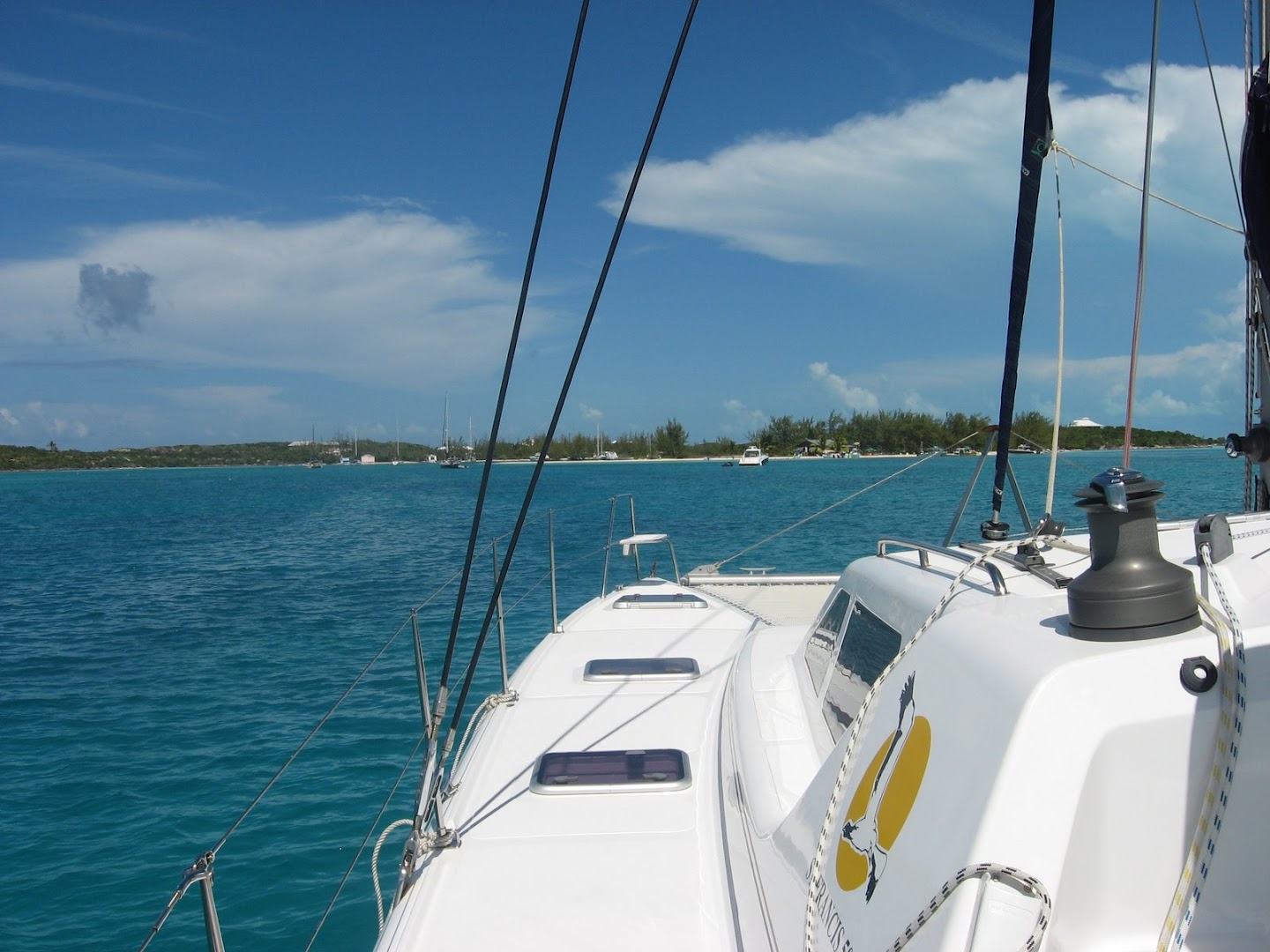 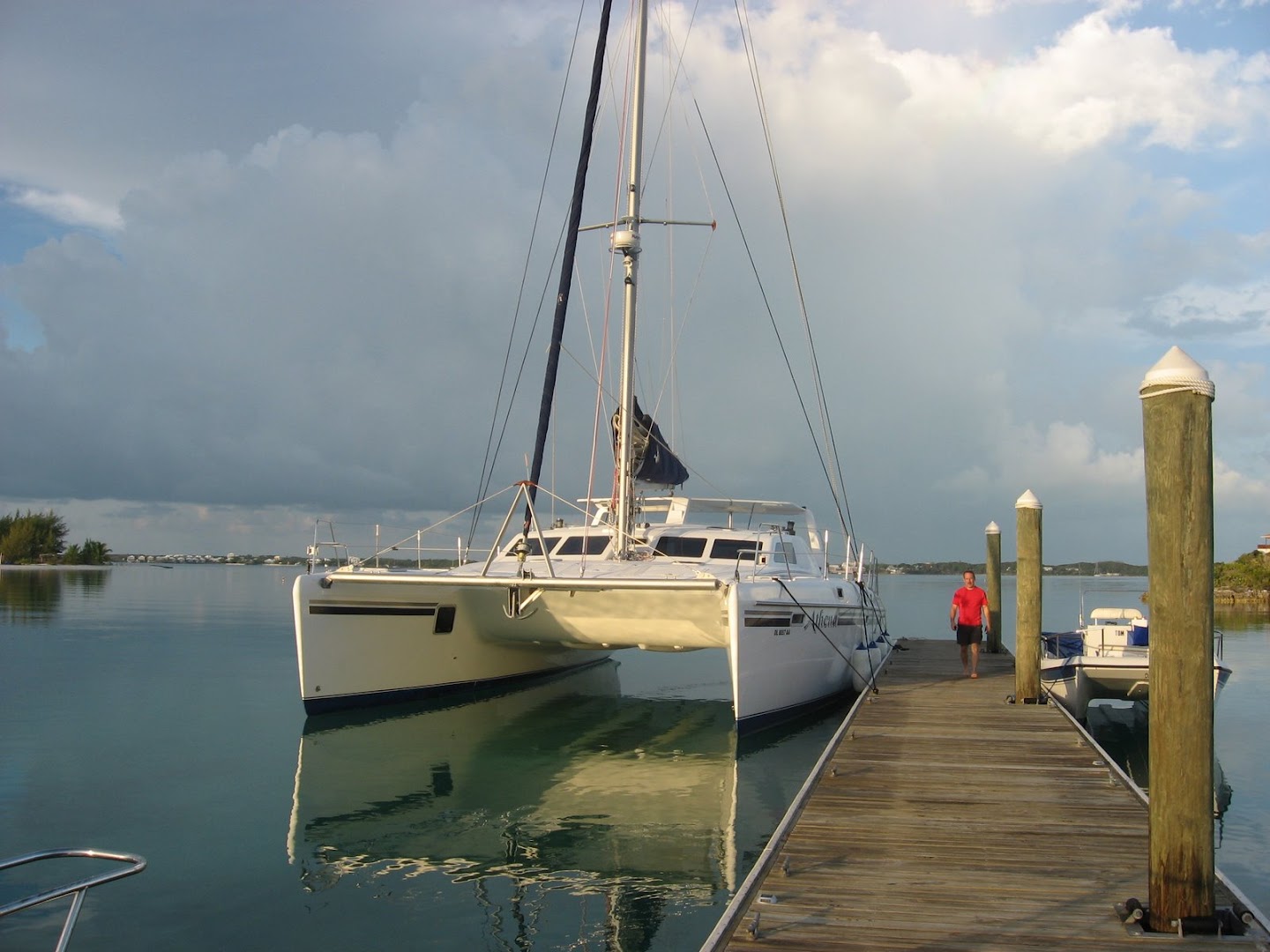 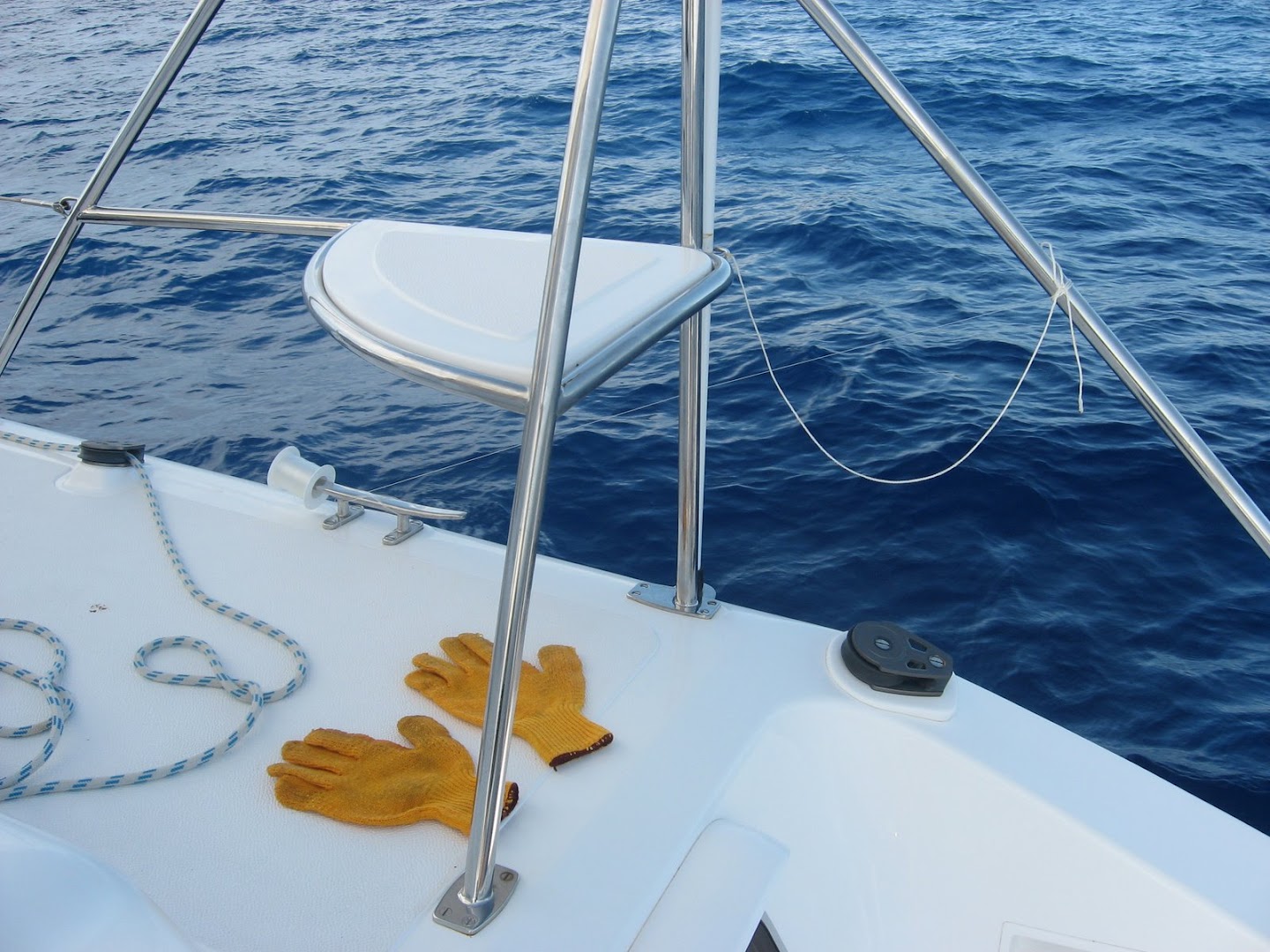 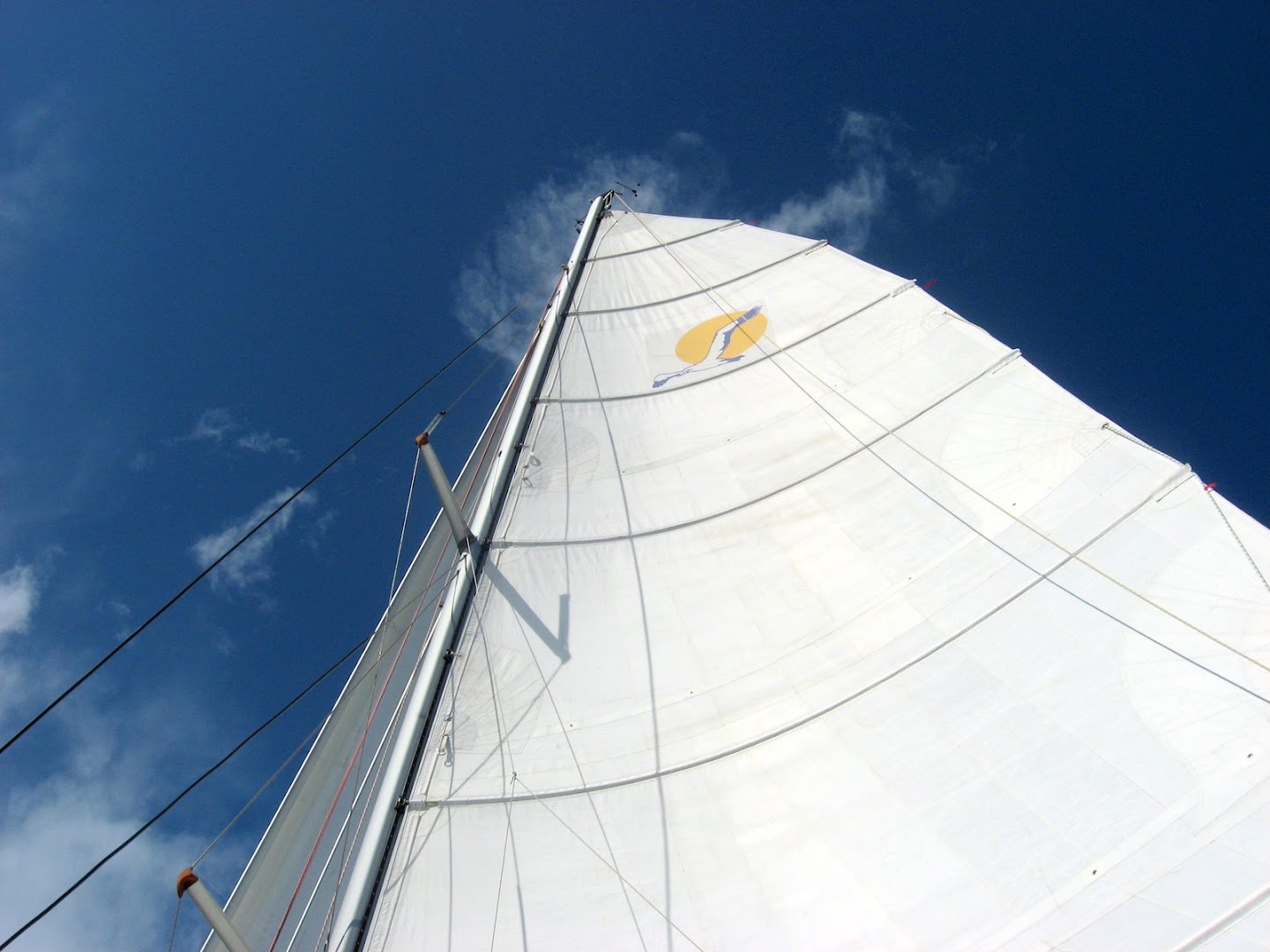 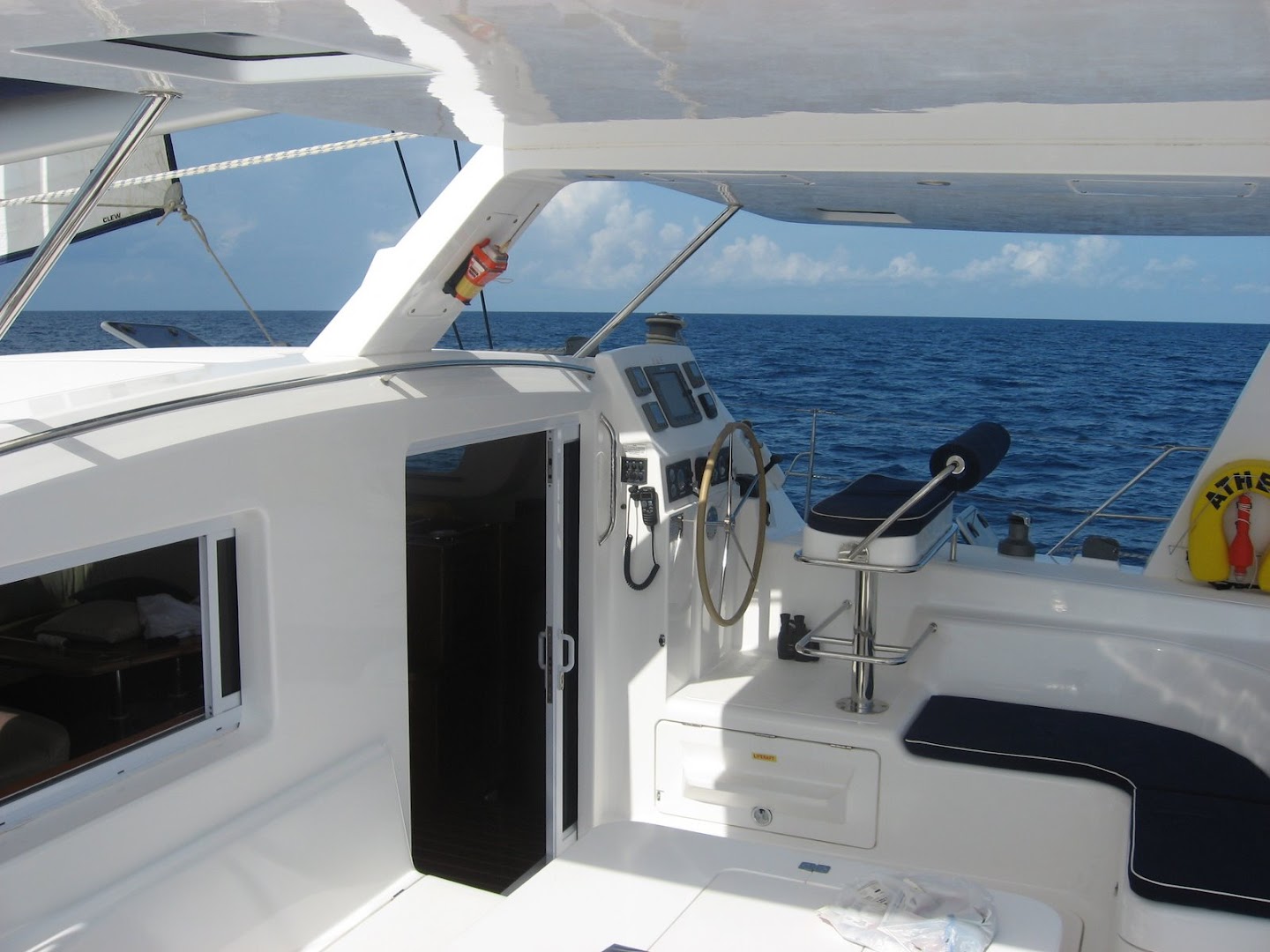 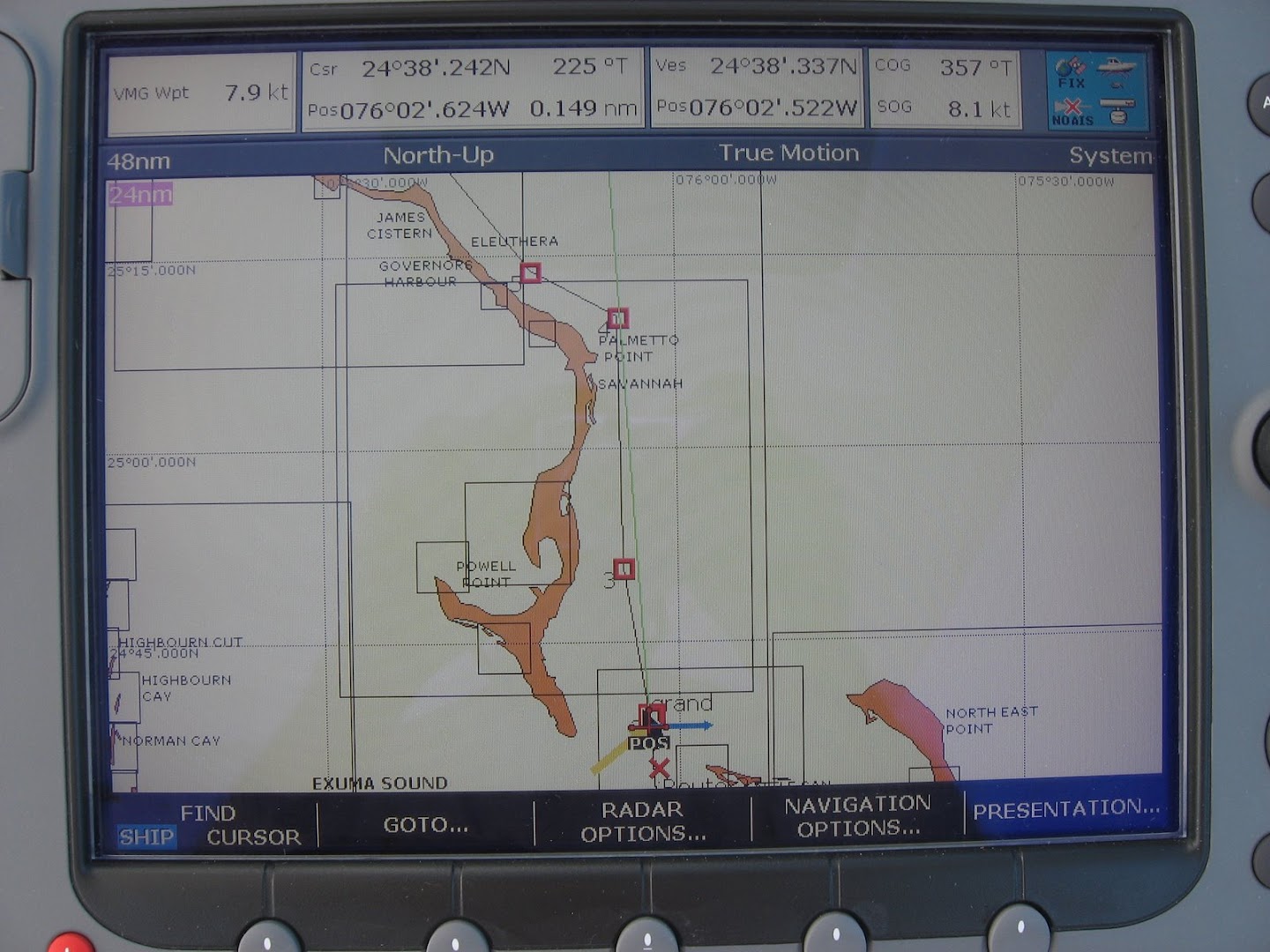 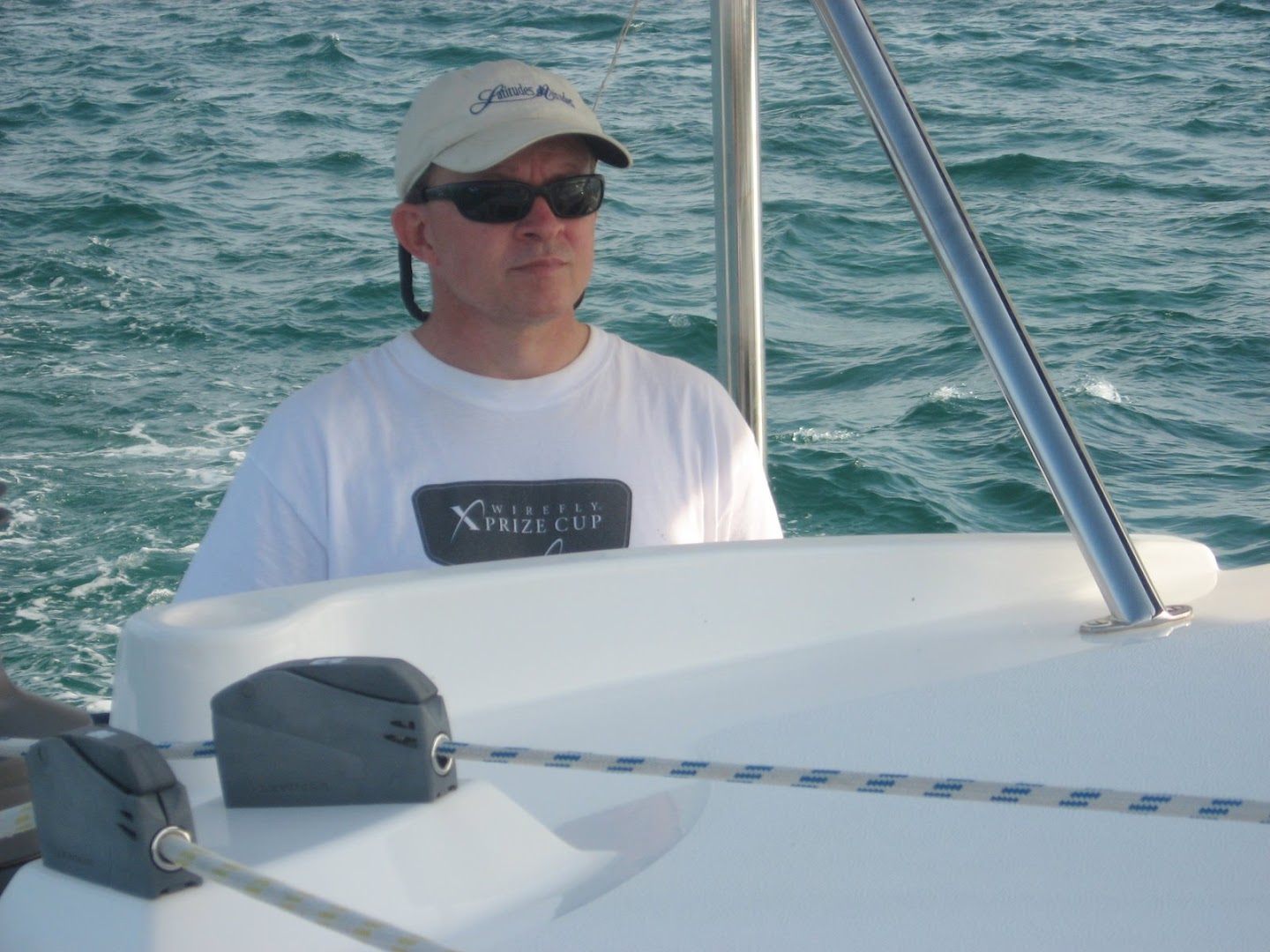 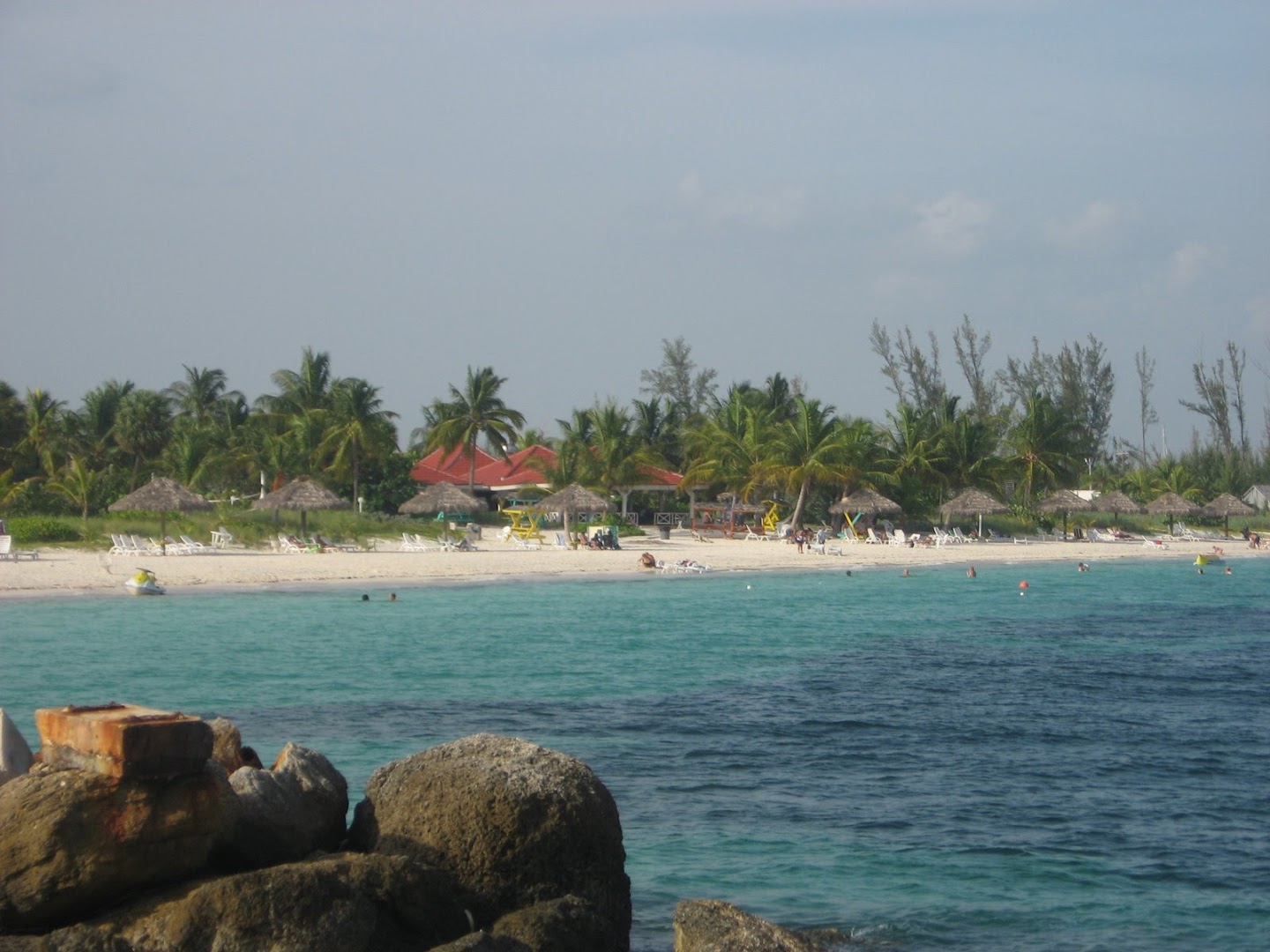 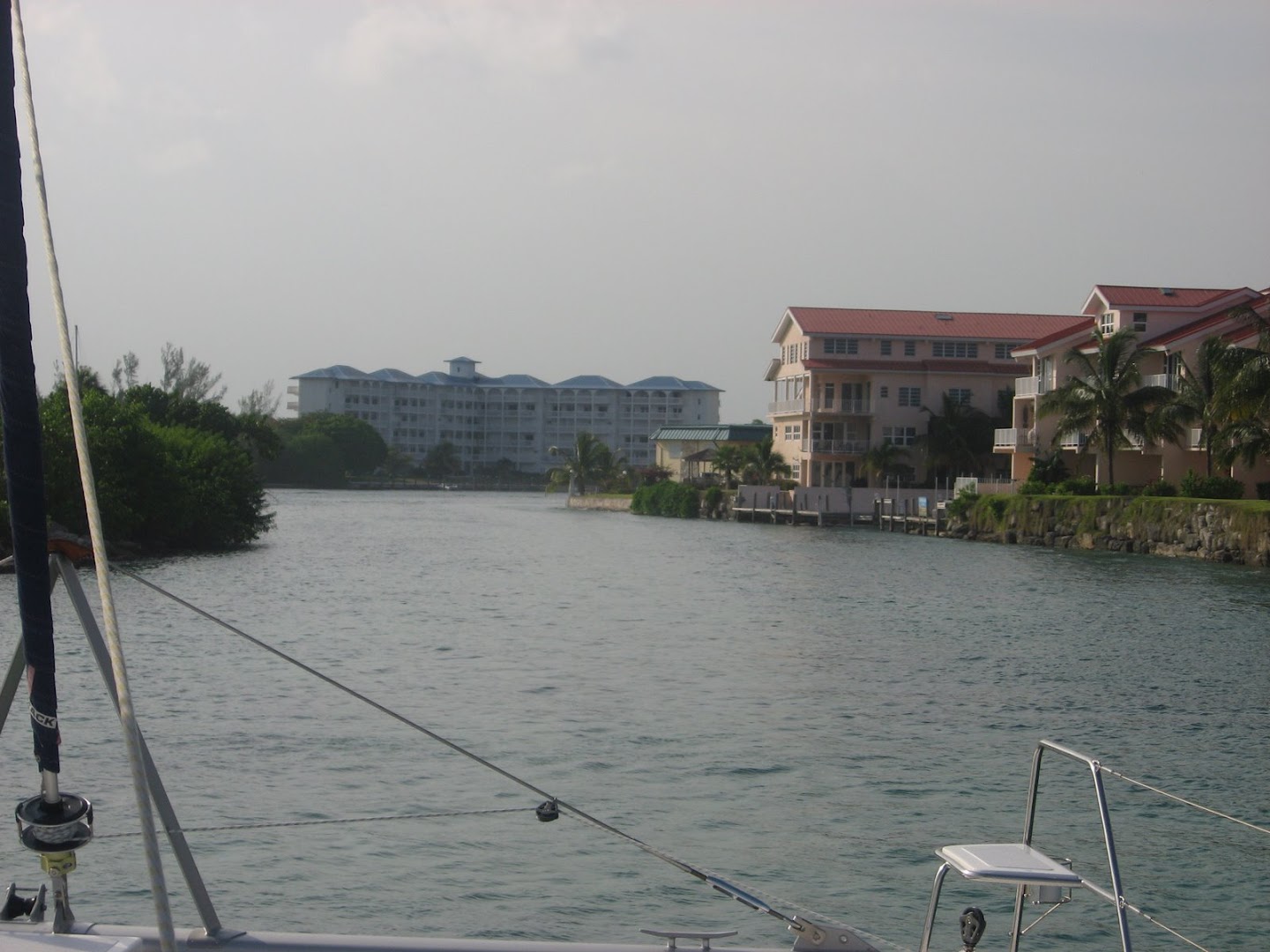 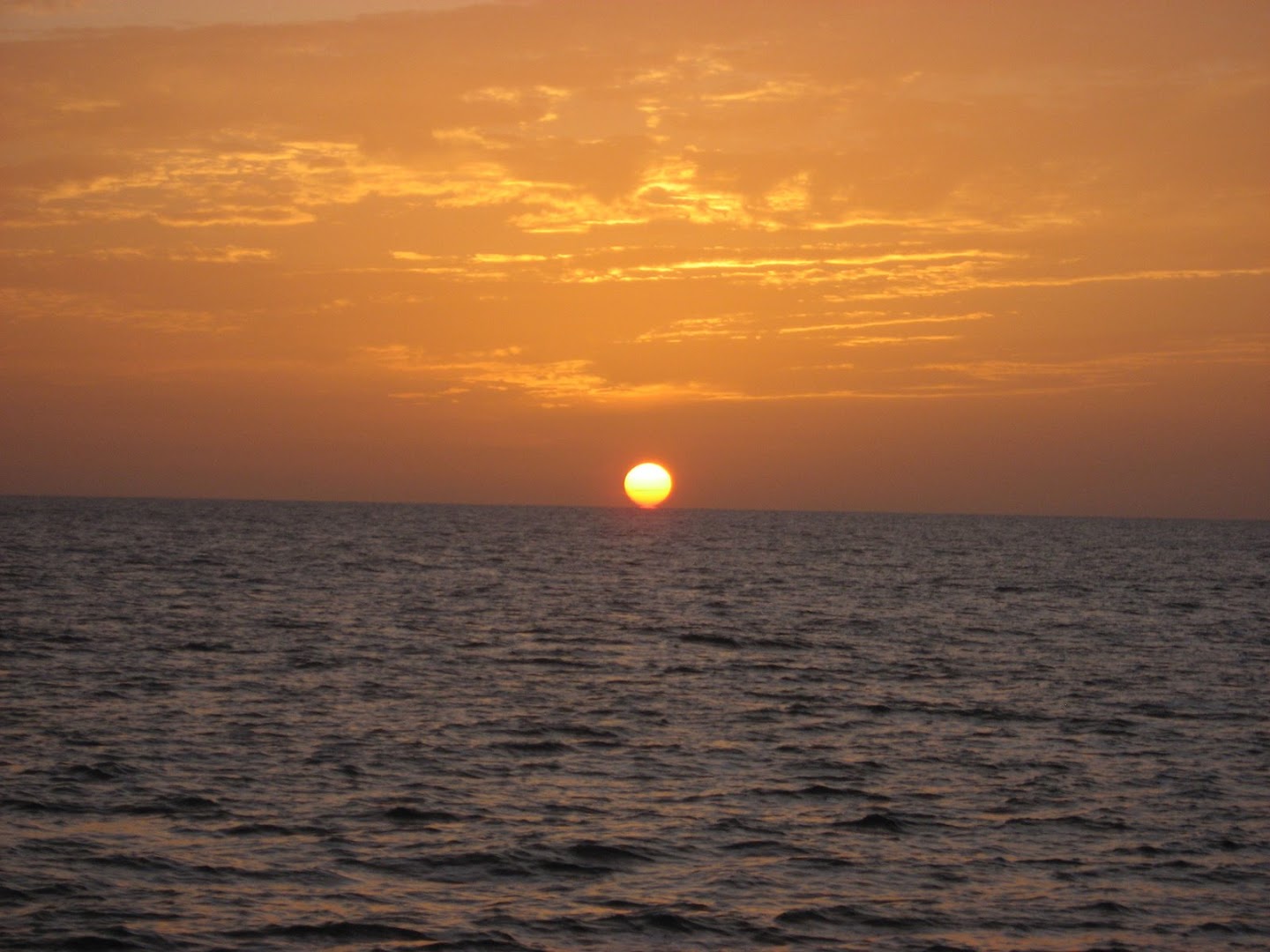 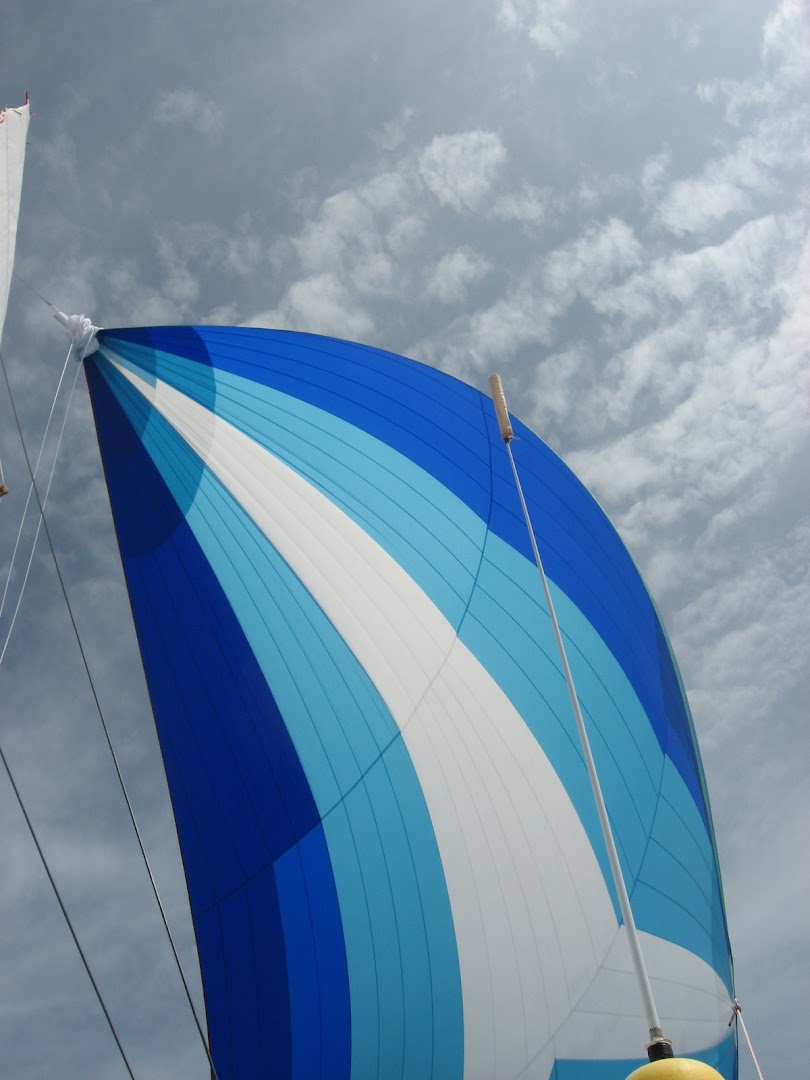 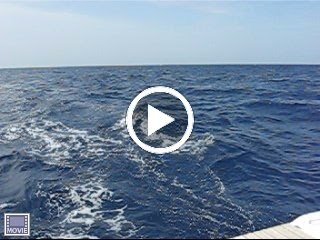 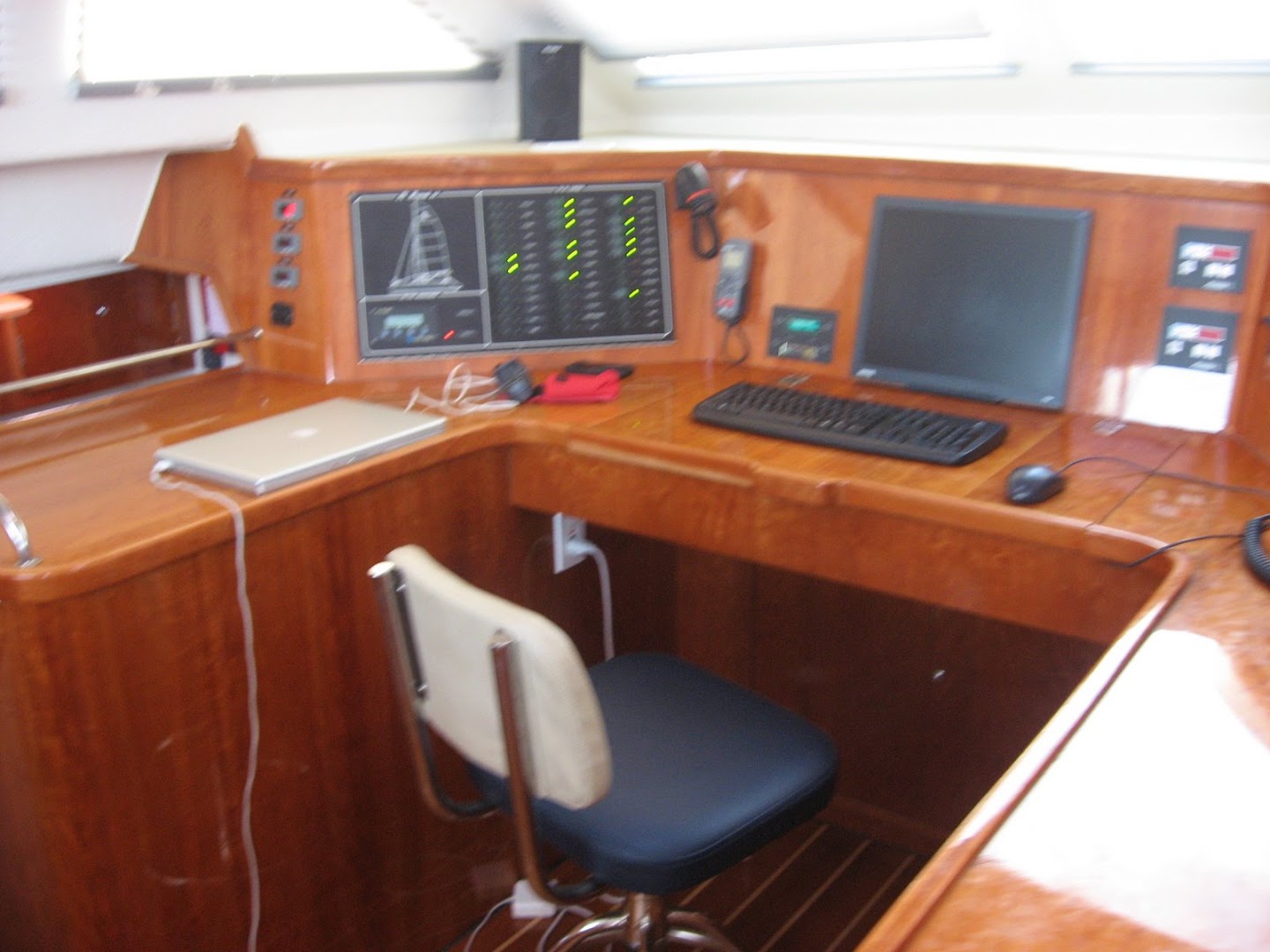 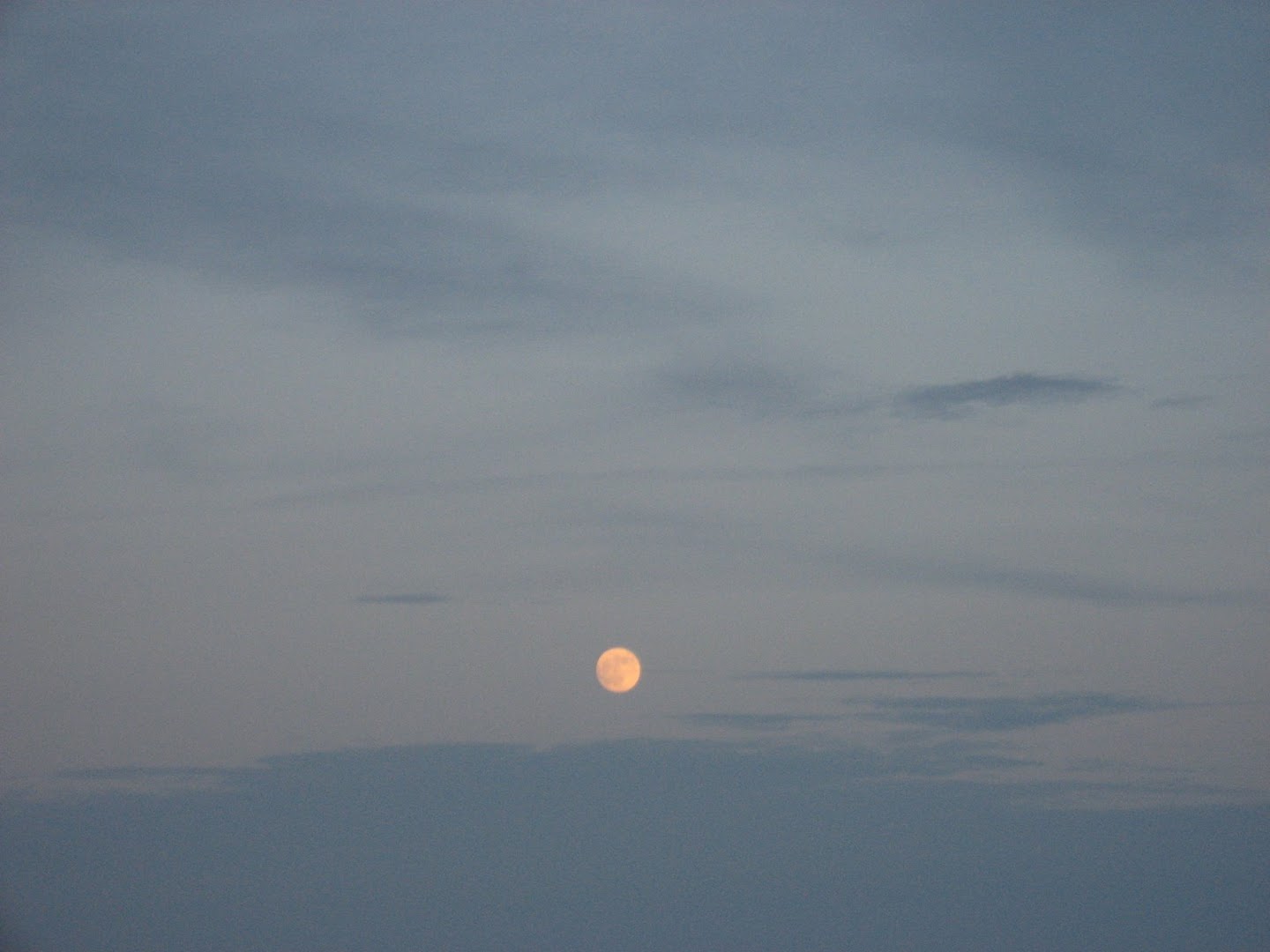 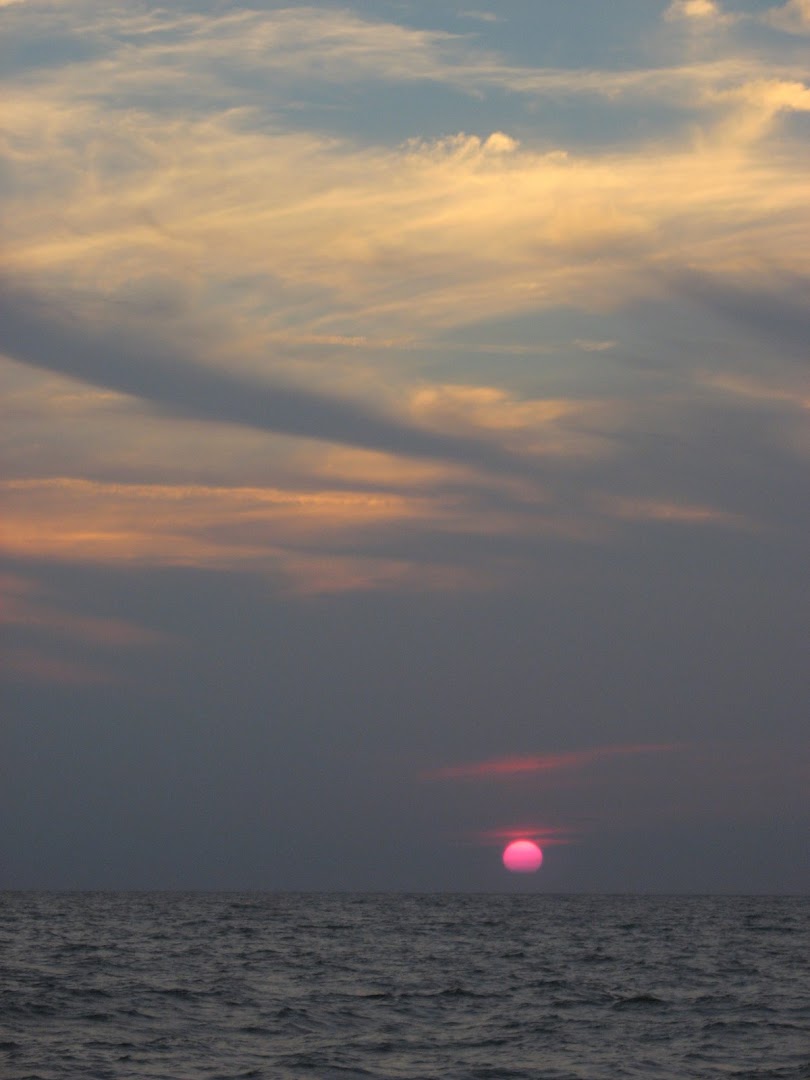 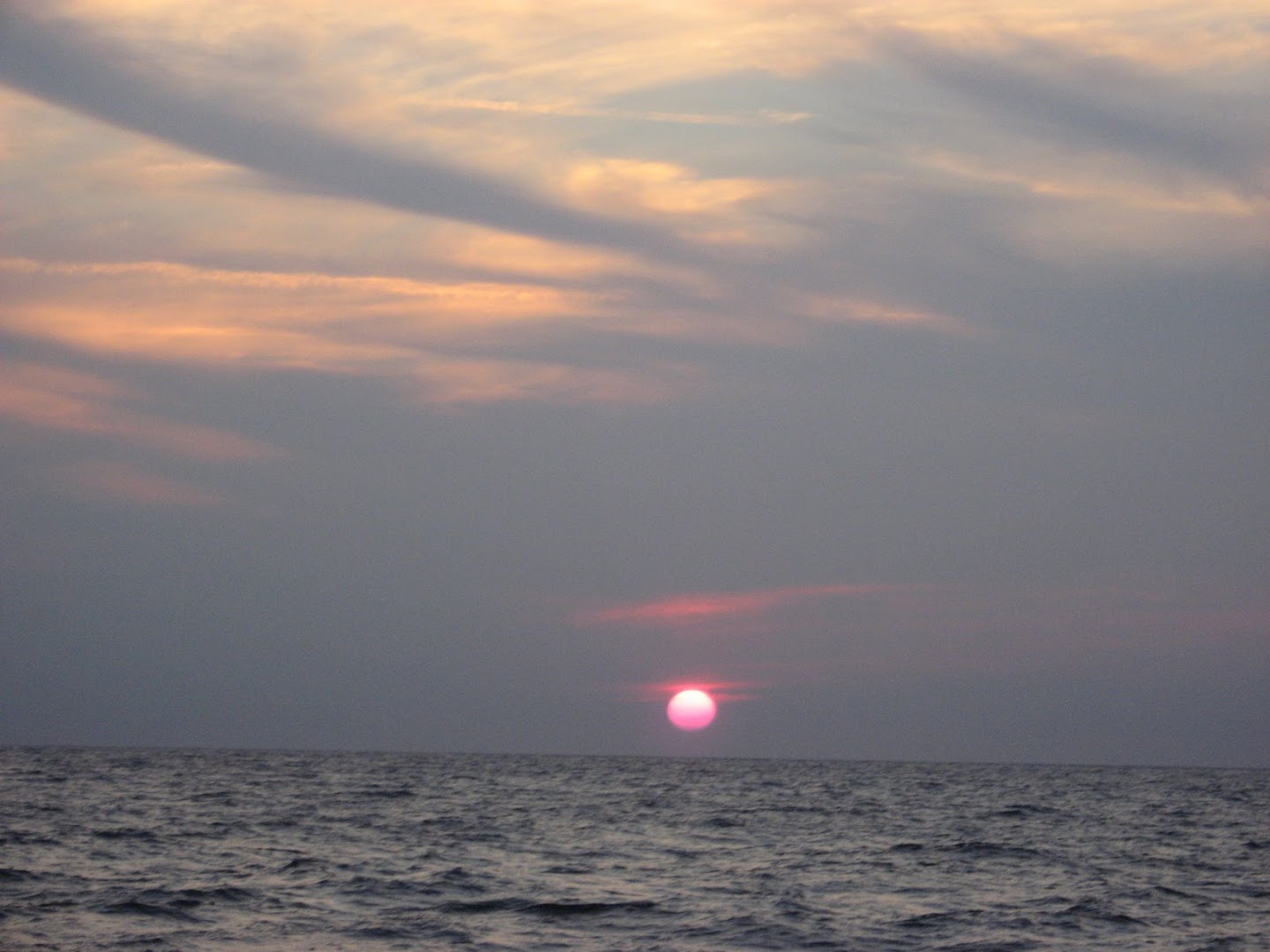 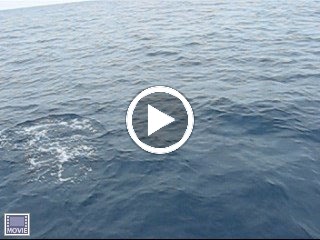 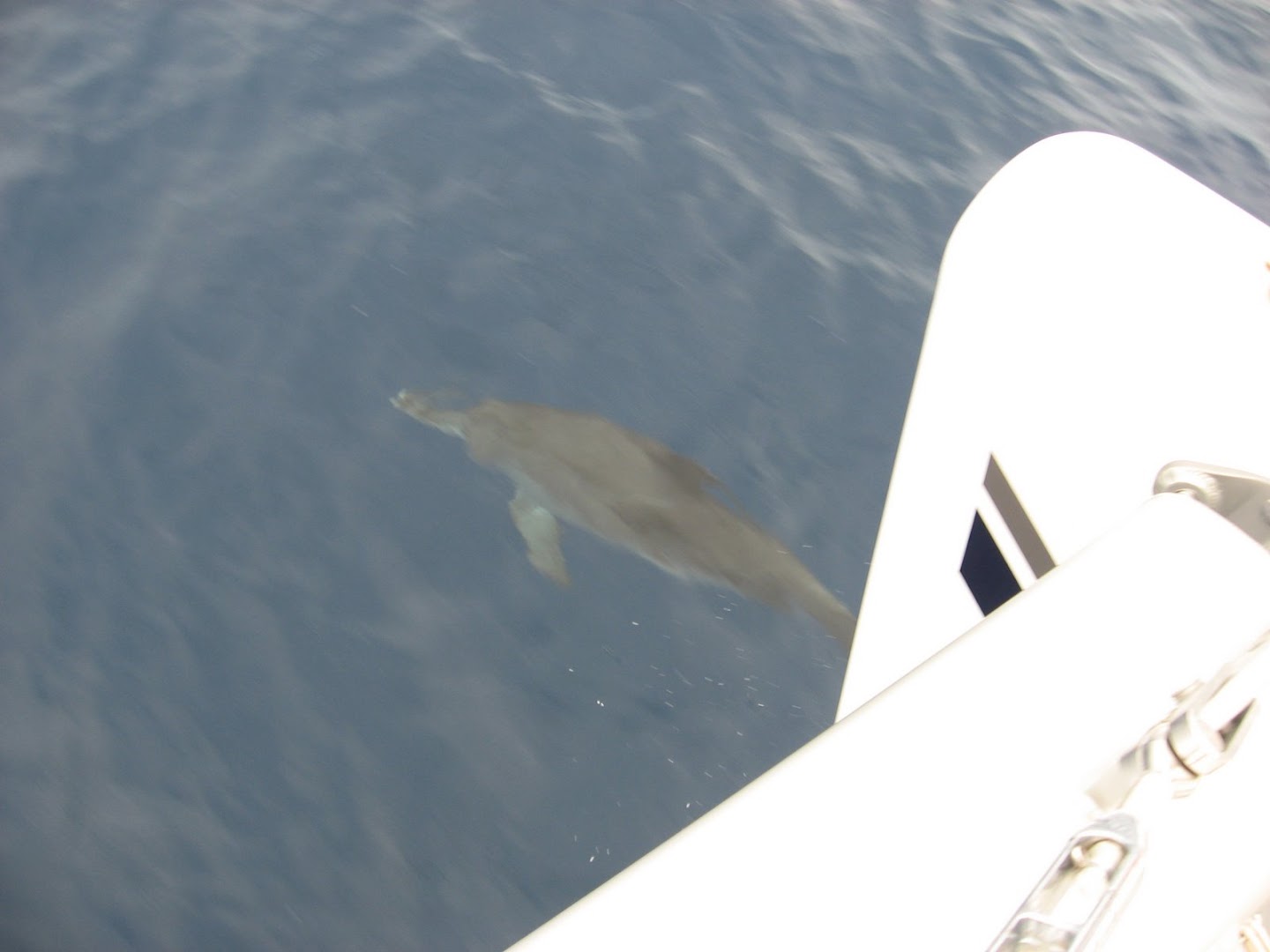 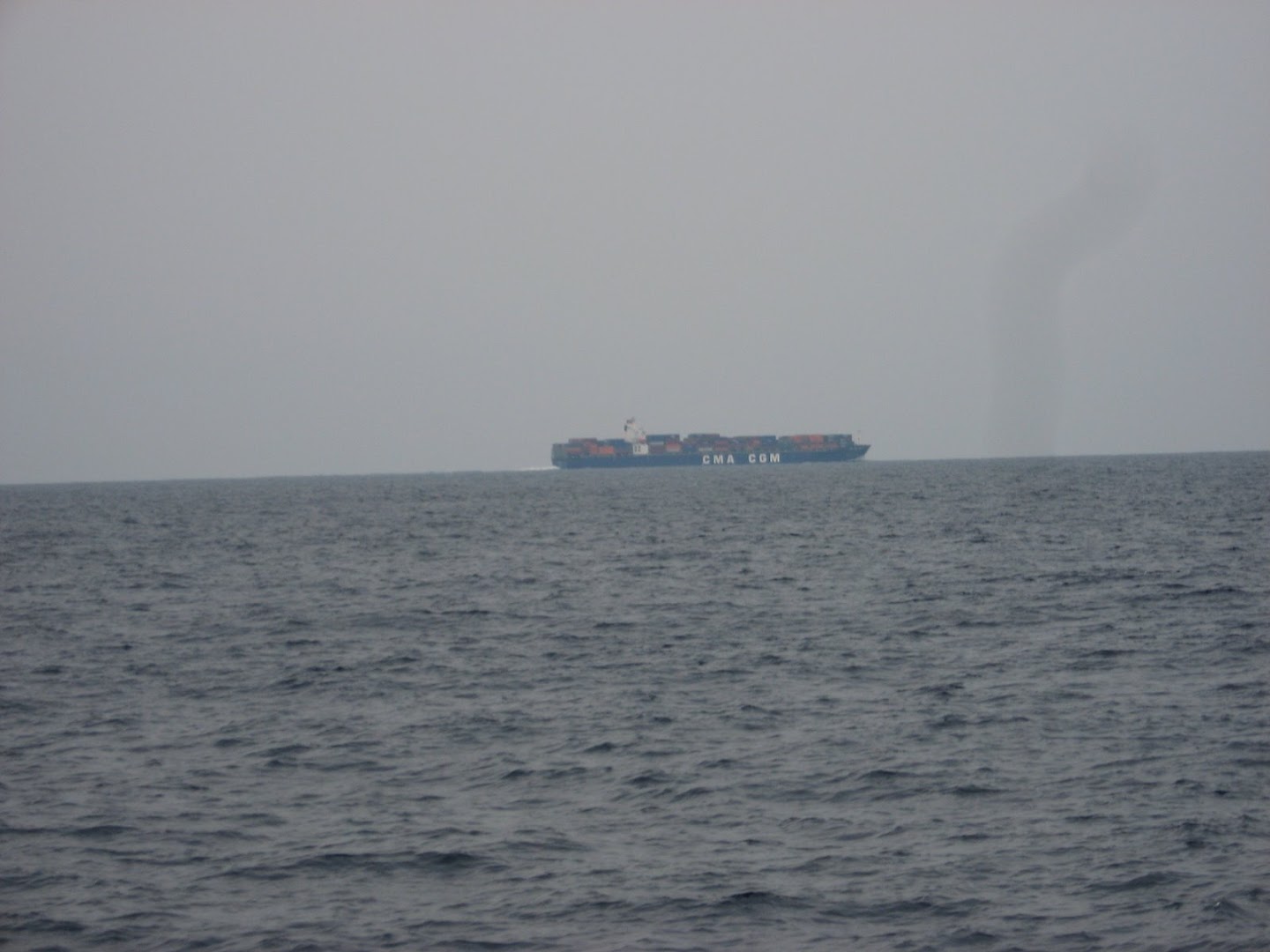 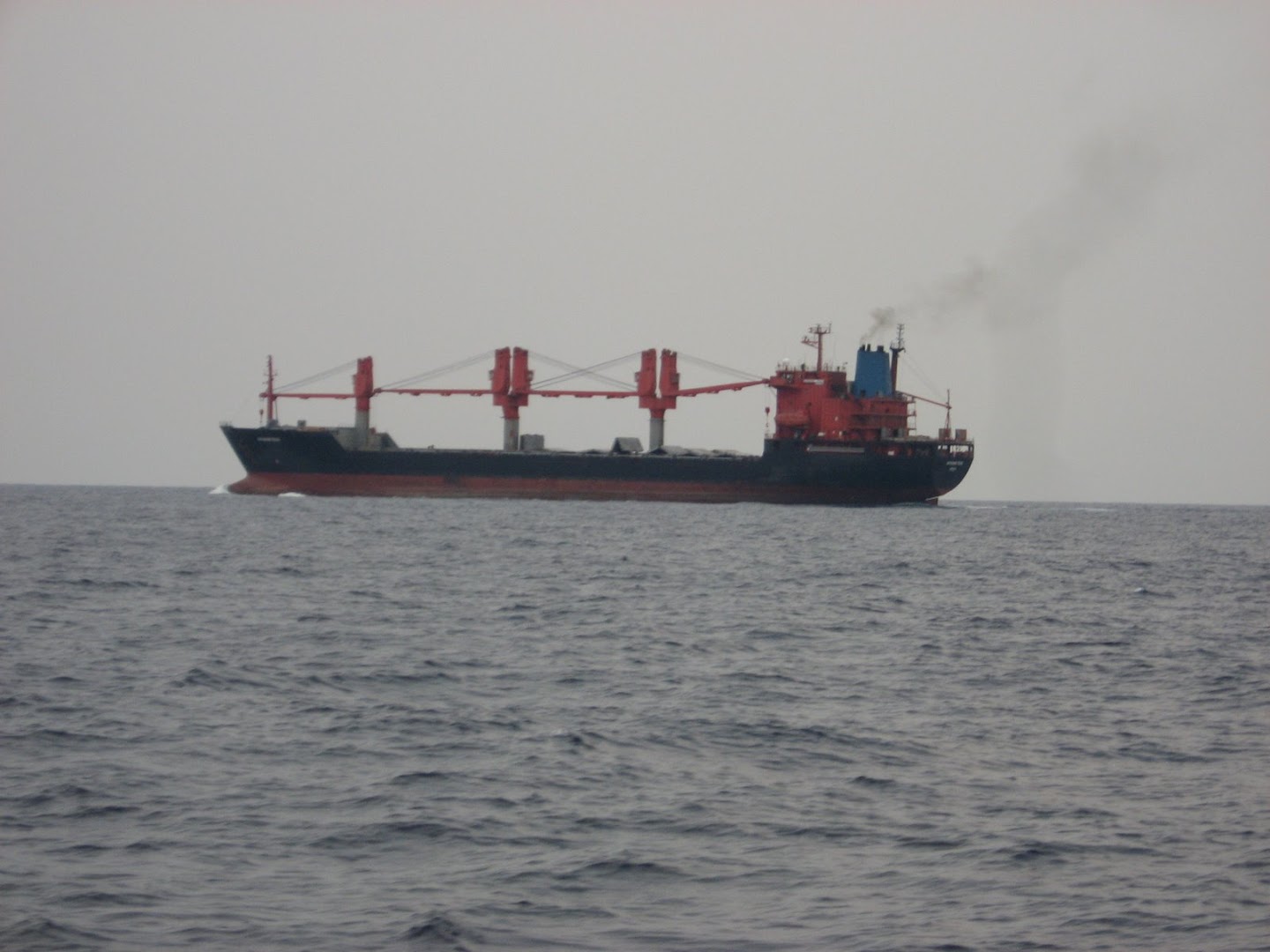 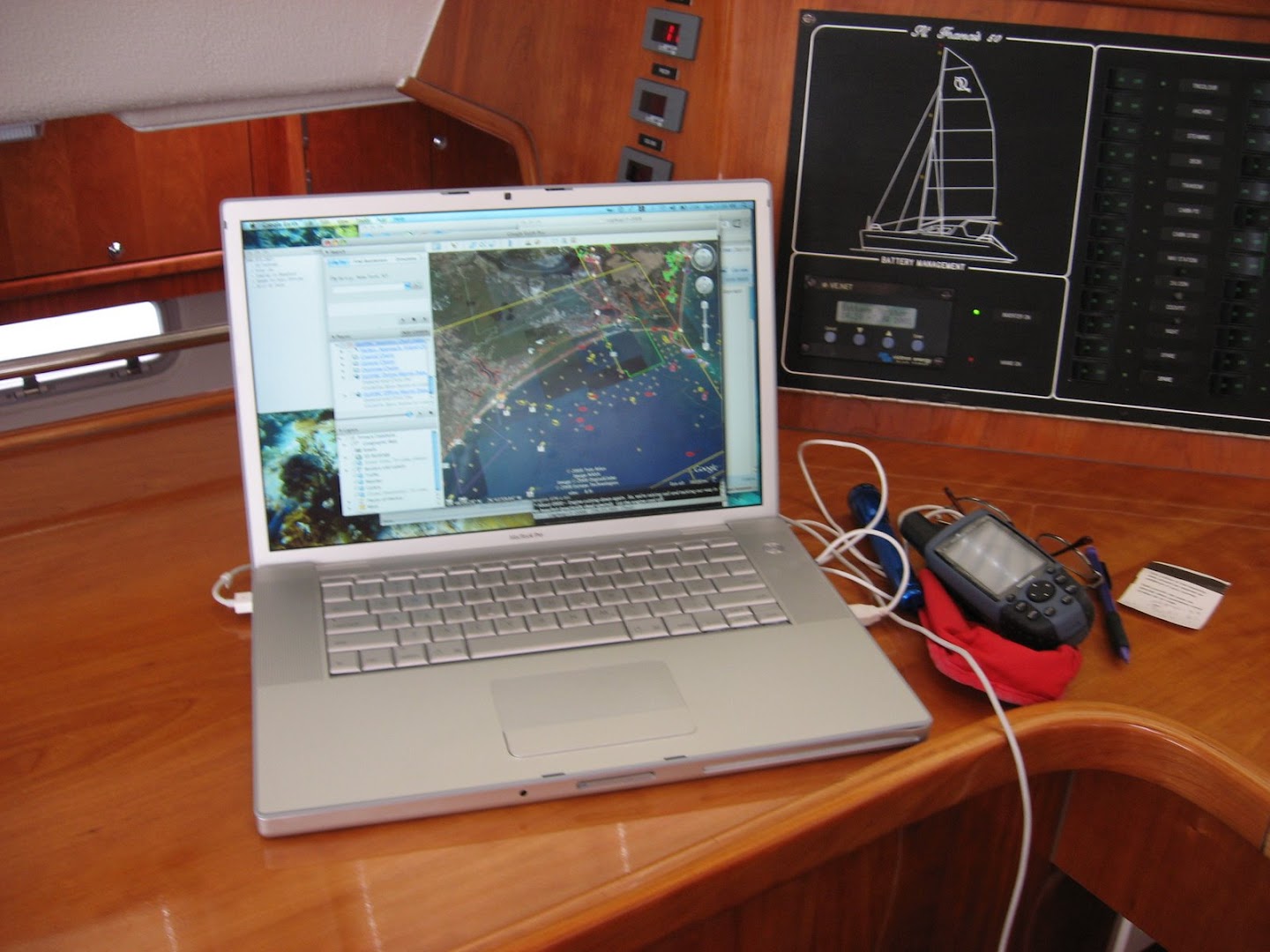 The winds were forecasted to be light most of the anticipated 4 day passage. The calm before the storm. This proved to be mostly true, although we did manage to sail a fair bit and used the sails to enhance our motoring speeds for most of the trip. A catamaran has two engines, but you only need to use one engine to maintain a good rate of speed – a little over 8 knots on our new boat. With light tail winds, it was very hot the first day. We trolled a fishing line in the water and actually caught a couple of barracuda – but, no fish we could eat (barracuda can cause ciguatera illness).

The second day we considered stopping in the Abacos for fuel, but the dock did not answer our hail by radio. So, we decided to cross over to Grand Bahamas and get fuel by the end of the day. We had a great afternoon sail – our first real sail of the passage. We got in to Grand Bahamas Yacht Club just one hour before they closed at 7 PM – got fuel and some quick provisions, and left within an hour. We saw very little boat traffic both days in the Bahamas. The fuel dock told us that business has been very slow due to the high fuel prices. At $6.22 per gallon for diesel, I could see why! That evening, we continued around Grand Bahamas and headed out to the Gulf Stream where we hoped to catch the current for faster speeds northward.

At 1:30 in the morning, just outside the Bahamas waters, Fred noticed a radar signal of a boat – but, could not see any lights. He was looking for it with binoculars when suddenly he was blinded by a floodlight. The radio burst on with “This is the US Coast Guard“. They asked us some basic questions (name, origin, destination, type of vessel, how many on board, etc.). Normally that suffices, but it was a calm night with a full moon. They “suggested” they would like to board our vessel to check for “safety compliance”. They both checked our papers, and thoroughly searched the vessel (I’m guessing in case we had “extra” visitors or “goods” on board). Very nice and professional guys – even if they were carrying weapons (and lots of ammo). They gave us a certificate that we met all safety regulations, and let us continue our way (by the way, they let us maintain speed and course the entire time). It essentially kept us from having a boring night of motoring with no wind – and kept us awake of course.

We did manage to catch the Gulf Stream for a good solid day which added nearly 35% more speed to our boat for a good 24 hours. But, we lost the current when it turned to the east – earlier than expected. We had a few sightings of cargo vessels along the way, and even had a couple of visits from dolphins (see the video in the slideshow). We got to fly the spinnaker for a couple of hours, and we had stronger winds at the very end – unfortunately, on our nose. We tacked our way for a few hours towards Beaufort, but ultimately motored the last hour or two into the harbor entrance. As a final touch, the tide was going out, so we had 3 knots current against us on the way in. Each night we had calm winds, so we had pretty straightforward night watches. The full moon made it easier to see the horizon and water surface – but, also spoiled what would have been some great starry nights. We had no storms or squalls cross us the entire way.

We arrived after 4.3 days and 862 nautical miles at the Beaufort Docks. Look at the KML file above for lots of details. I used GPSVisualizer to colorize the track according to speed. The photos were geotagged using Google Earth. If there were more photos, I would have used some other tools. Turn on the “Waypoints” folder to see all of the placemarks.

Special thanks to Virgil of EarthNC, who provided me with electronic charts I could use in Google Earth to help provide perspective as we went along. I cached imagery for our intended route so I could use Google Earth off-line. Virgil also shared some Bahamas charts he’s been working on. Which came in handy when we did the approach for fuel in Grand Bahamas. EarthNC has some great tools and data for boaters turning Google Earth into a rich chart plotter.