On Saturday December 13, we left at about 2 AM from Carolina Beach to move Tahina south to St. Marys, Georgia.  My brother John lives there, so it was a convenient place to move for a while.  We’ll be moving further south after the holidays.  The route took us a little over 300 nautical miles which we completed in just over 1.5 days. We arrived at about 4 PM on Sunday.

Karen and I got up and left while the full moon was high and bright.  We wanted to time our arrival to make sure we would be there during daylight hours.  The winds were pretty strong for the first day – averaging between 20-30 knots, but gradually dropped as we continued south.  We also had a tail wind for a good portion of the trip which made for good conditions to fly the big spinnaker sail.  But, we have a policy of not flying the spinnaker at night, so our speed was a couple of knots slower slower on Saturday night. It is too risky flying the spinnaker at night because you have to leave the cockpit area to raise and lower the sail.

The entire trip was recorded on my Garmin GPS, and we even remembered to take some photos.  I’ve now processed the GPS track and geotagged some of the photos.  I used GPSVisualizer to convert the GPS track into KML and to colorize the track according to our speed. If you look closely at our track

in Google Earth, you can see how the boat would surge with the gusts of wind and the following seas (which were in the 6-8 foot range). You can also see we had a broad range of speeds, but mostly averaged in the 8-10 knot range. At the end of the trip, we motored into St. Marys Inlet with an outgoing tide – which reduced our speed by 2-3 knots. 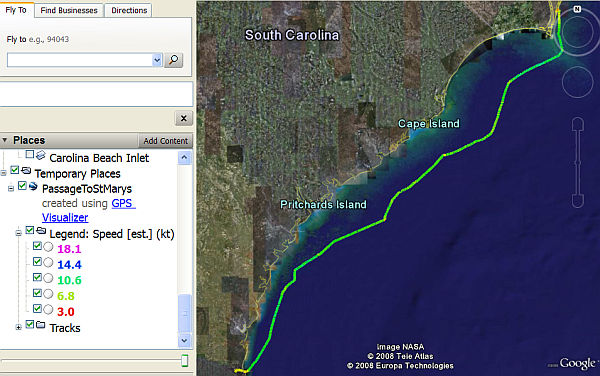 Below is a slideshow of photos showing parts of the trip down, and pictures from St. Marys, Georgia after we arrived. You can see St. Marys is on a river (called St. Marys) which is the border between Georgia and Florida. There’s a large marsh just to the south of the town and the marina. St. Marys is a small southern town with nice little shops, a pretty park, old trees with spanish moss hanging from their branches, and very friendly people. Also at the end is a photo of our new dinghy “Coconut” taken after we first tied up at the back of the boat (it was after dark since that’s when the truck arrived on Monday night).

This entry was posted in Passages, Sightseeing. Bookmark the permalink.