We had some delightful days in Virgin Gorda visiting with three Canadian kids boats: s/v Rhythm, s/v Gromit, and s/v Salty Ginger. I enjoyed getting to do some snorkeling (we found a very distinctive cannon in one spot), did a hike with the men from all four boats where we combined some beer stops with scenic overlooks and finished at a bar and ordered pizza. We also went exploring and found a nice beach on the other side of an island where we had a beach hangout afternoon. The last night, we had everybody over to Tahina for sundowners. The shot here shows everyone (except me) in Tahina’s cockpit which I took with a fisheye lens and then corrected the perspective.

Karen and I needed to get moving so we could catch up to our friends on s/v Wild Goose (a boat owned by friends of ours from Raleigh who spent a while in the Mediterranean and are headed home for a while). We first sailed over to the far end of BVIs to clear out in Soper’s Hole, then took a short jaunt to do a snorkel at Water Lemon Cay. That snorkel turned out to not be so fun because there was a lot of little jellies called “sea wasp” and I got several small stings and one nasty one on my upper lip. I did see a nice sea turtle that let me swim around with him though.

The next day we moved to St. John’s Cruz Bay and cleared in to the USA – since St. John is part of the US Virgin Isles (USVI). It only took a few minutes, and then we went ashore to do some shopping. One goal was to get a SIM card for 3G service. Well, it being a US area, it wasn’t so easy. After being told no SIM cards were available from the local cell companies, we ended up having to get a very expensive one from AT&T. Welcome back to America. Our average SIM card around the world was $4, AT&T was $30. Our average 3 or 4GB plan was about $35, AT&T was $60 for 4GB. Ouch.

Next we went to lunch at a local BBQ place that we had smelled earlier. It lived up to its smell with fabulously tasty BBQ pork ribs. We tried to find some t-shirt souvenirs, but were very disappointed with t-shirts costing $32 (in St. Martin, similar quality shirts cost $5).

Before I start the story about the finger, here’s a photo album showing lots of pictures from the very scenic Virgin Gorda, the cannon we found, and other underwater shots. 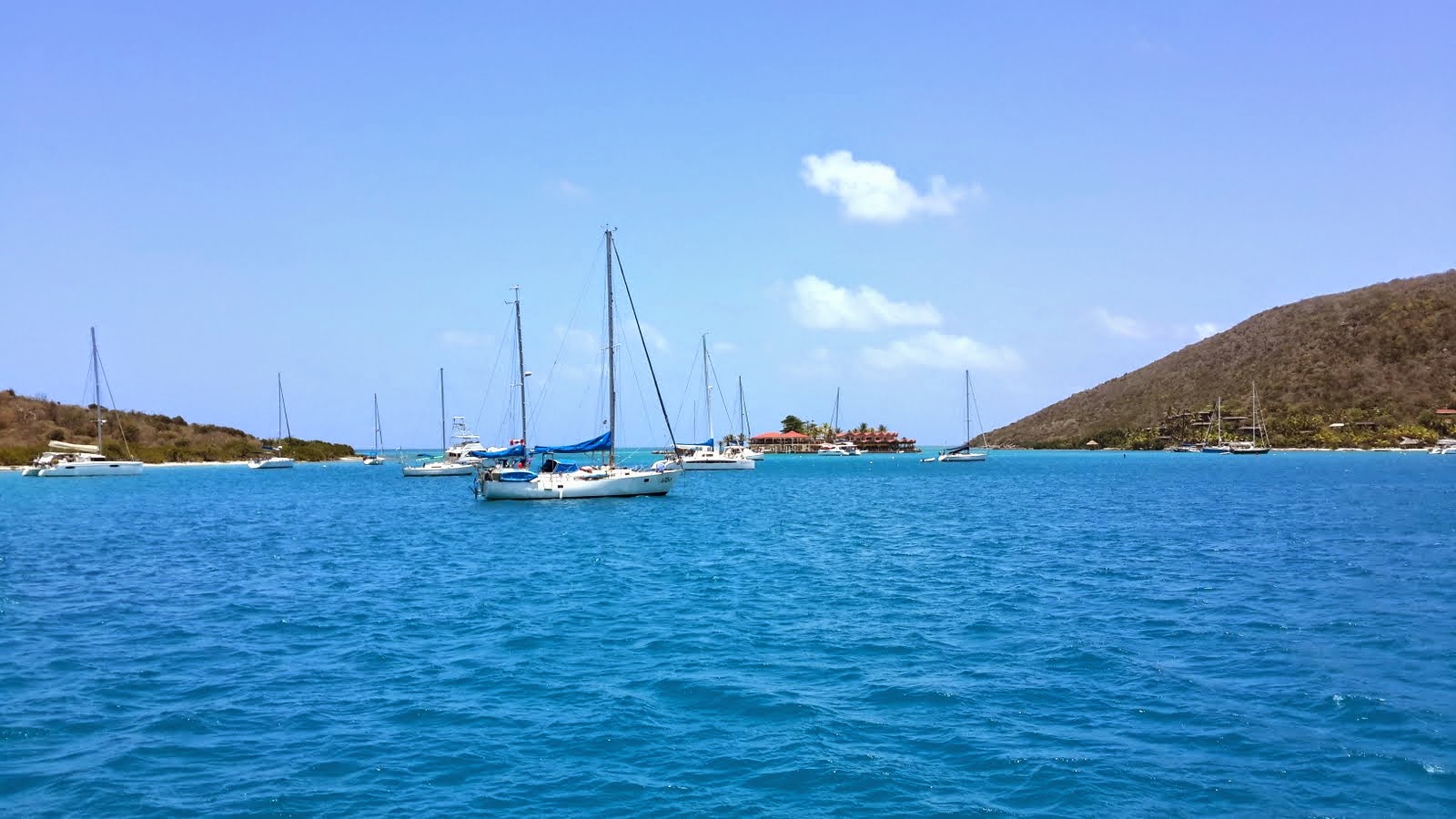 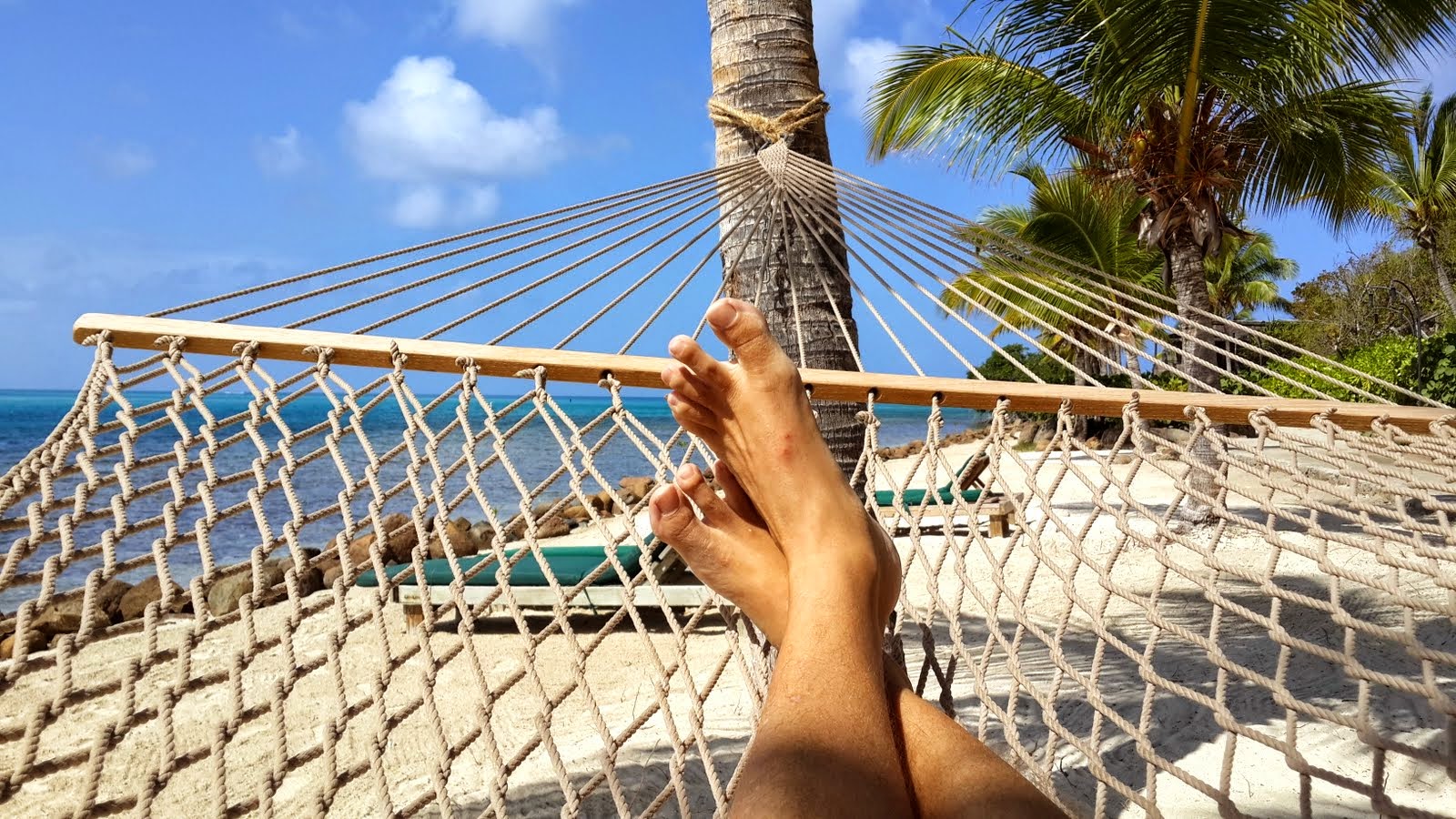 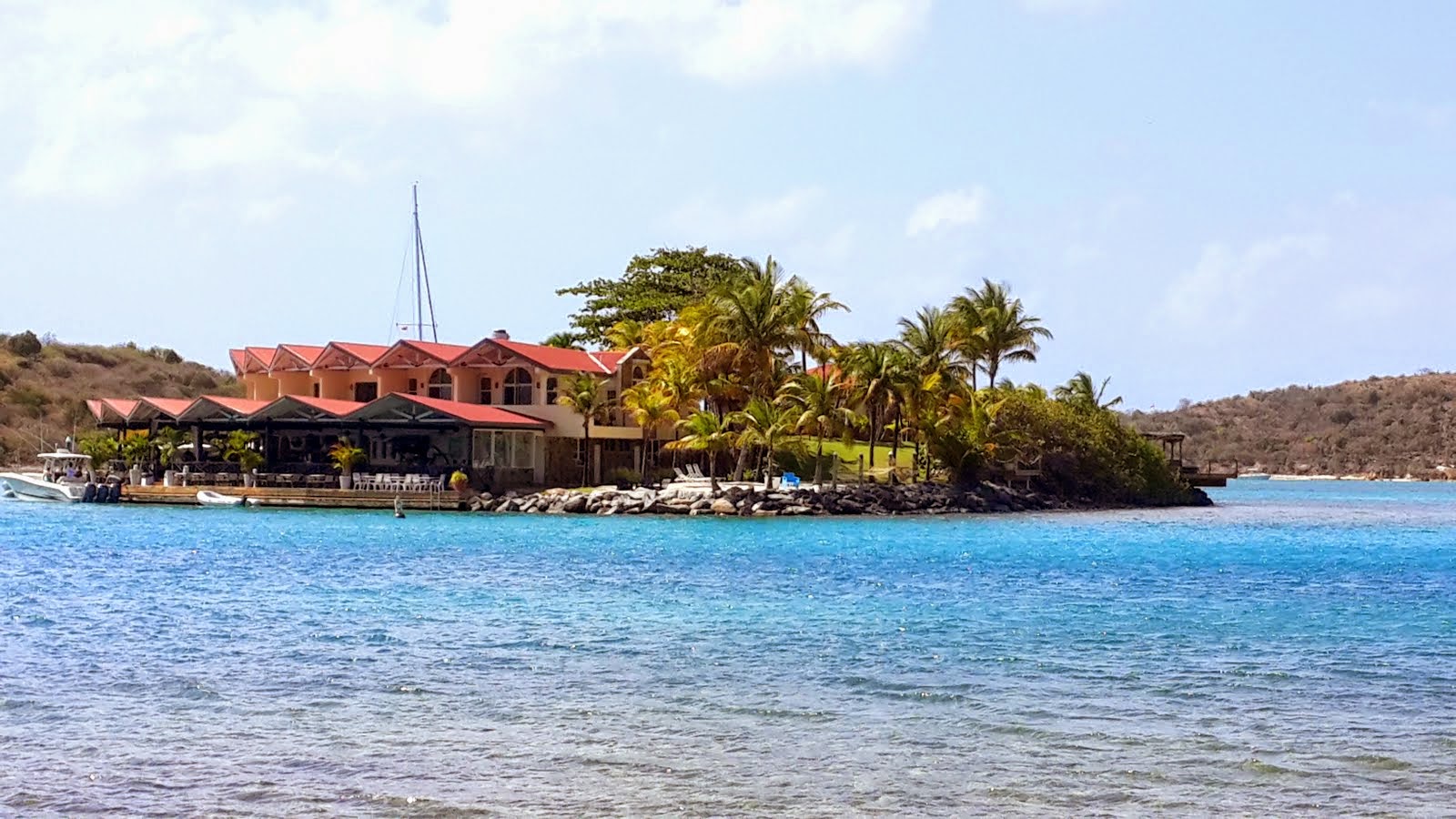 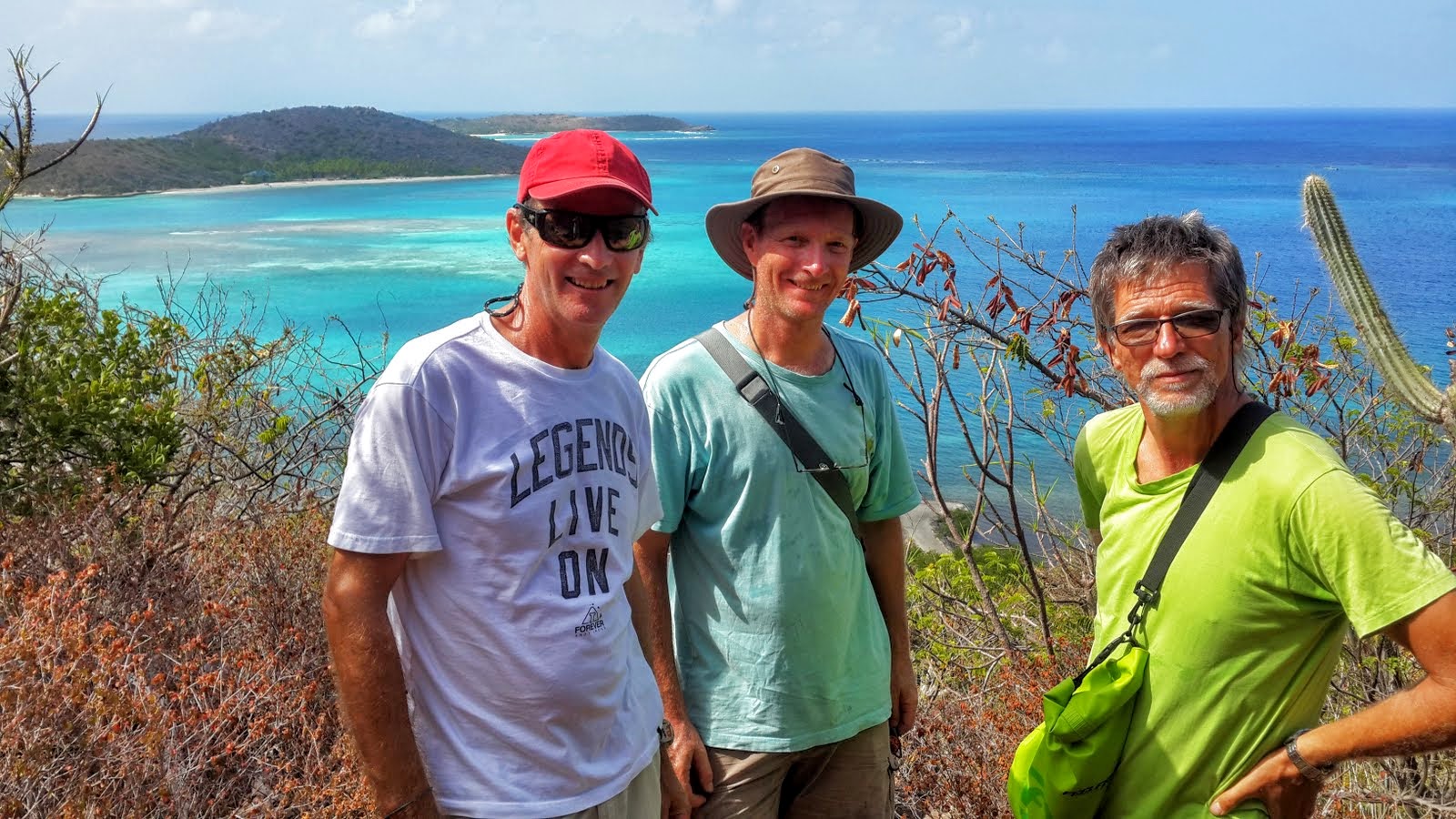 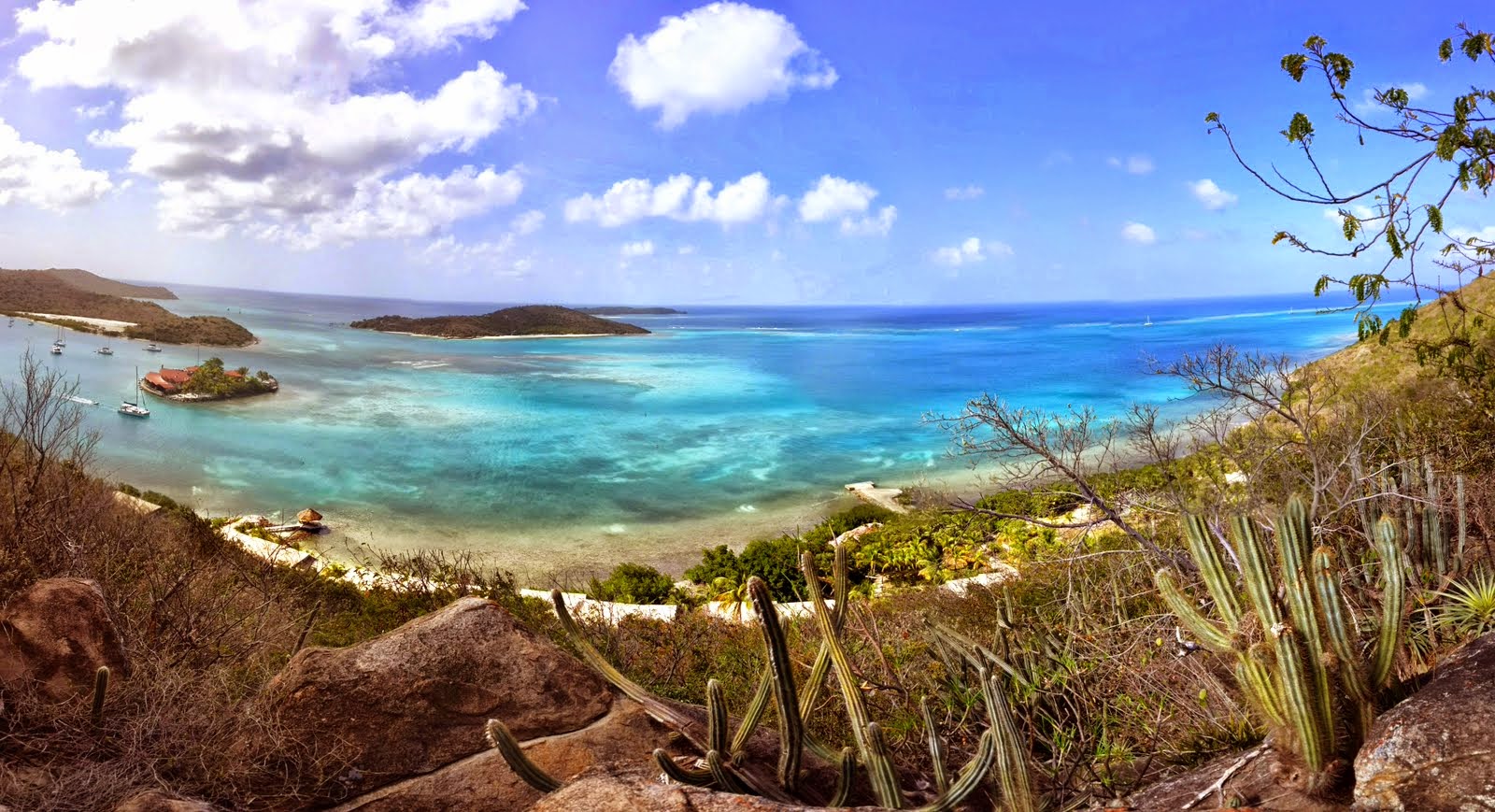 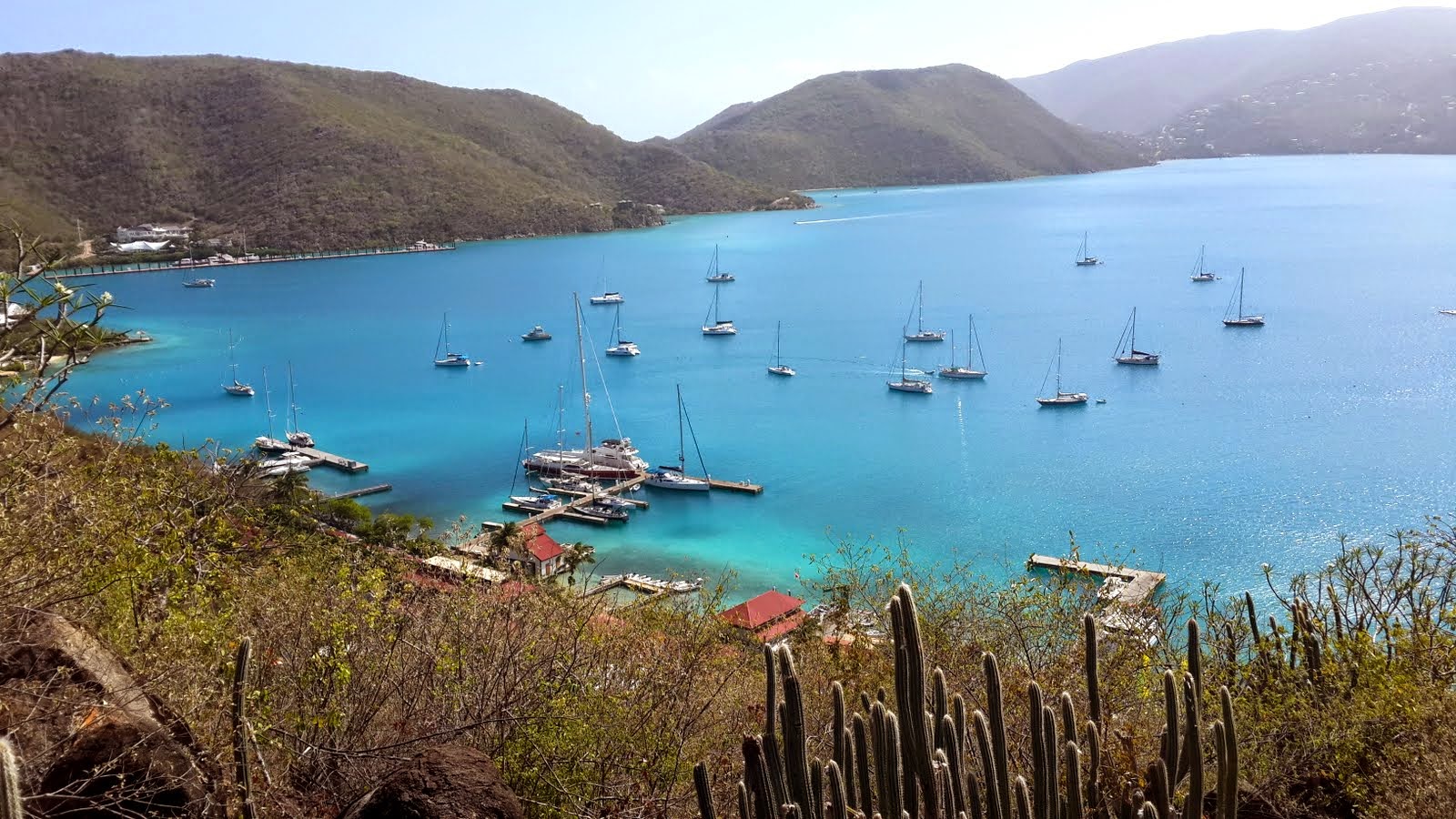 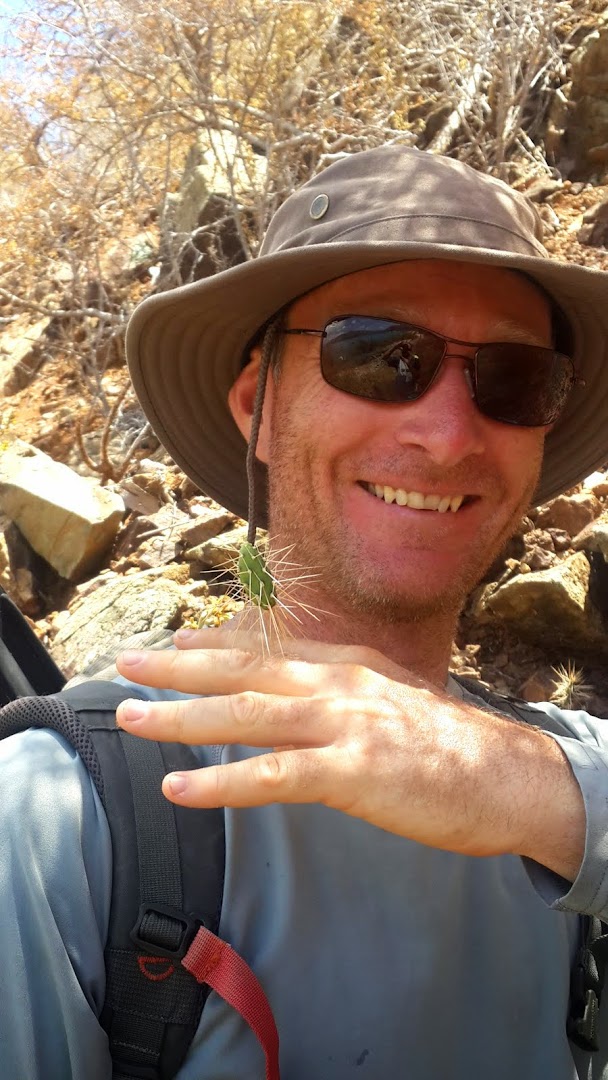 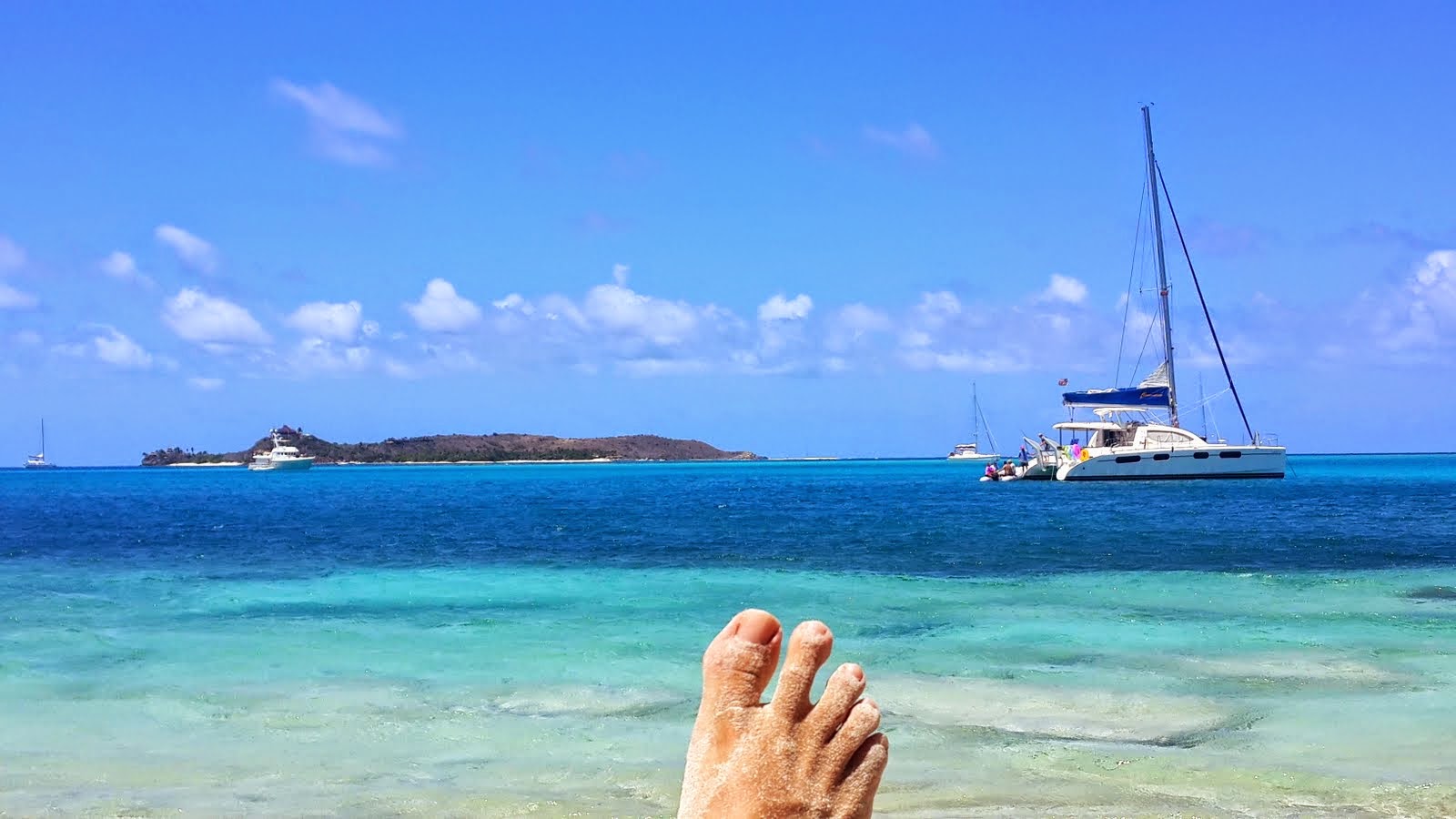 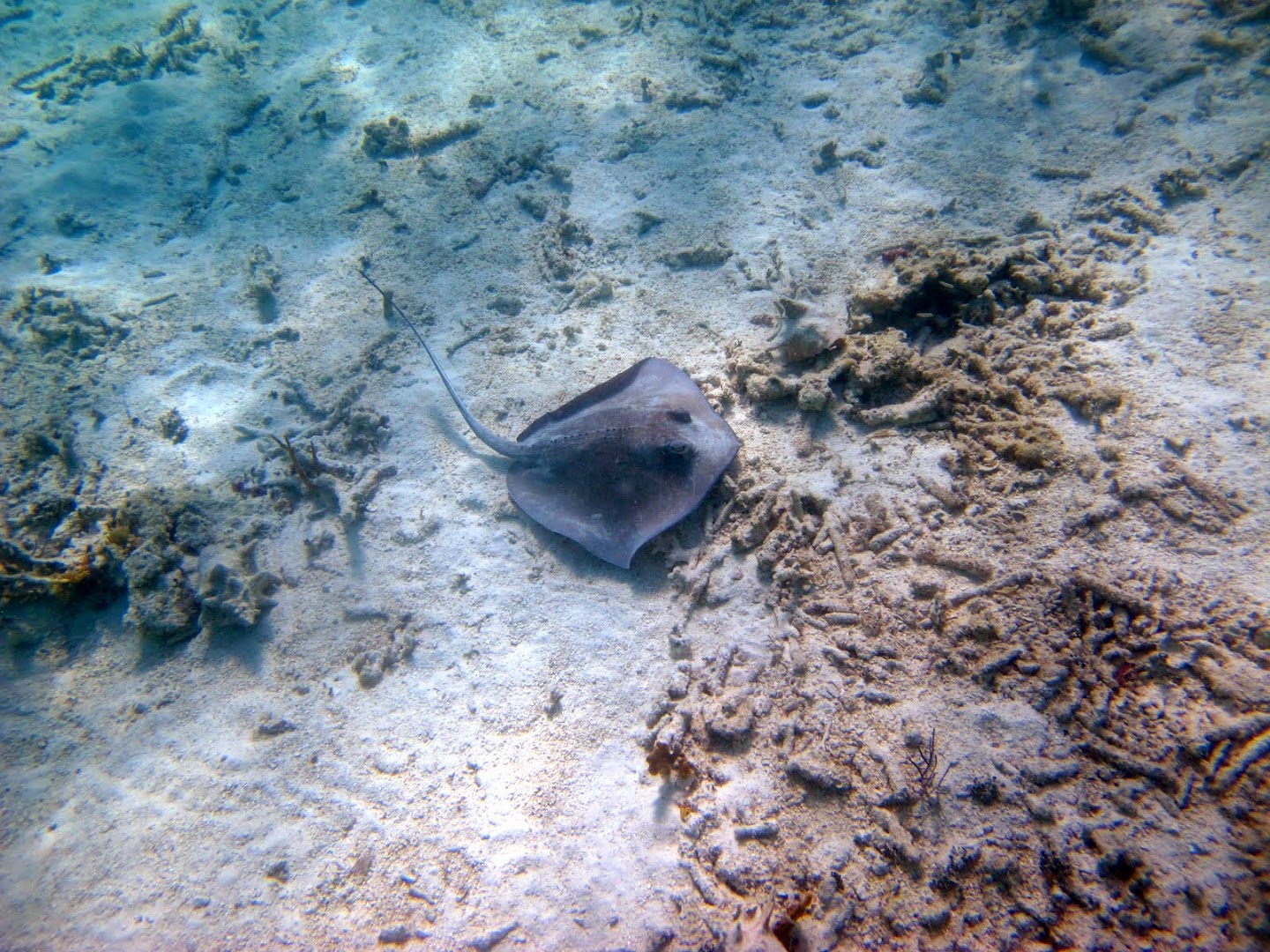 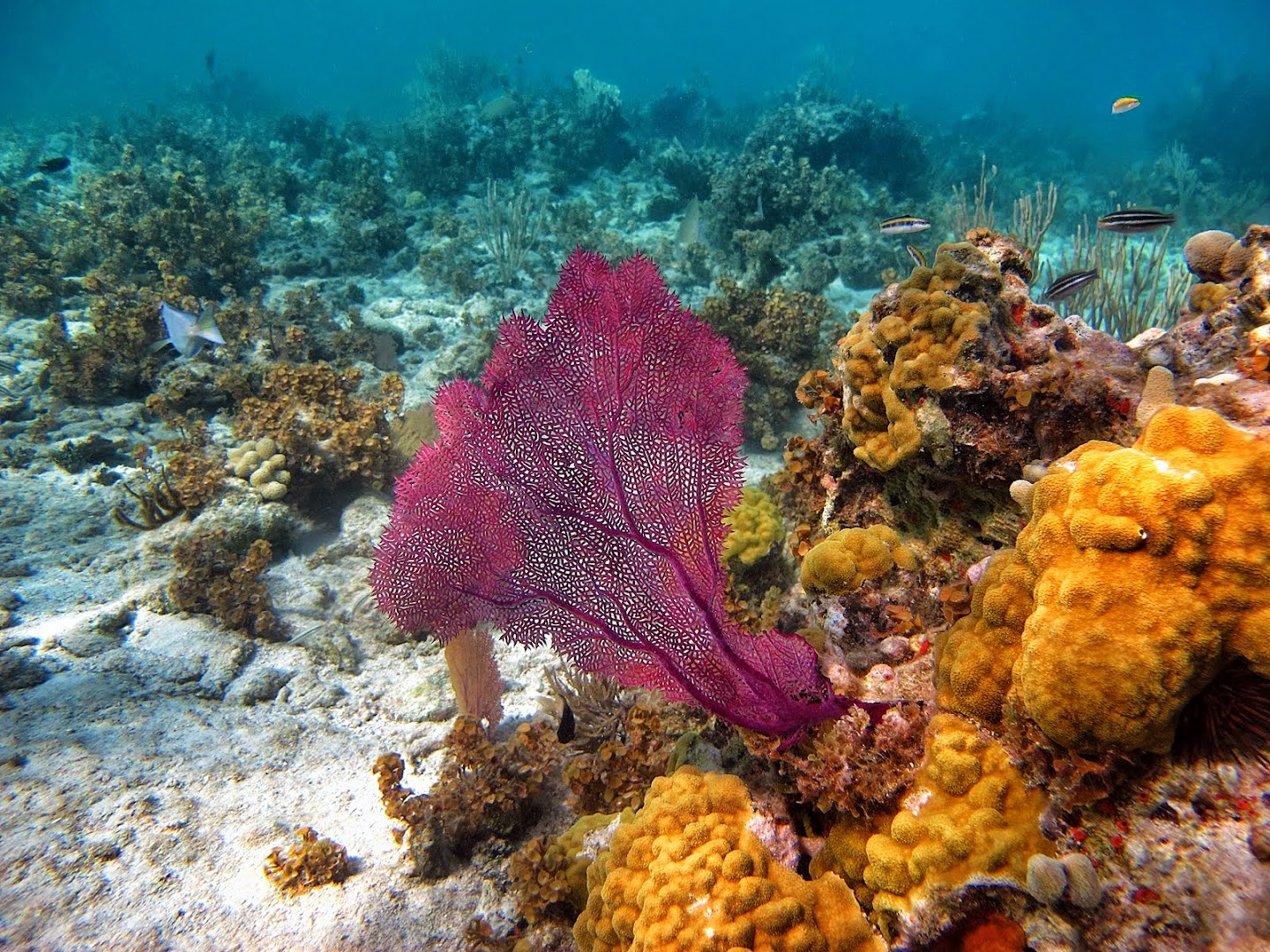 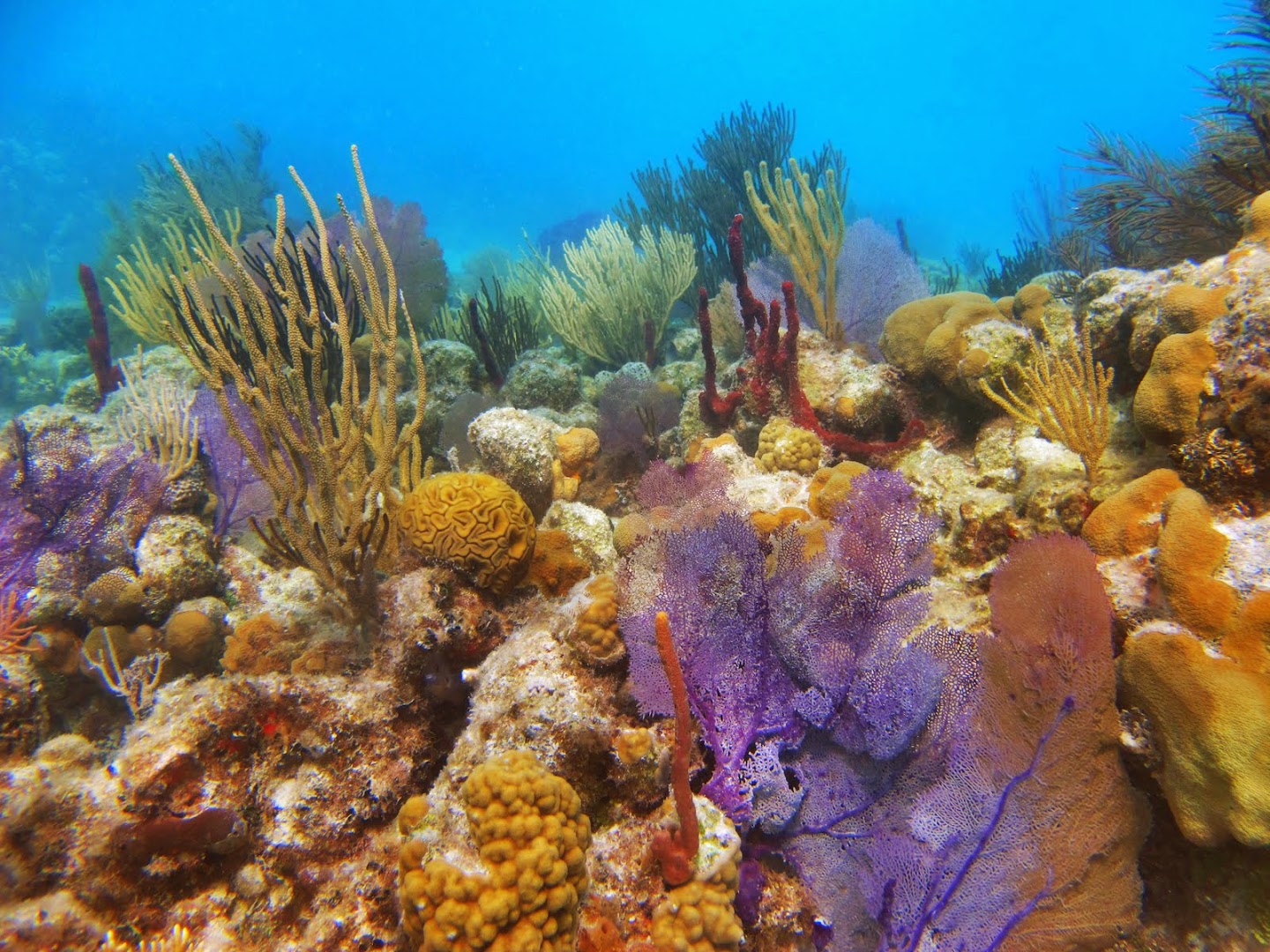 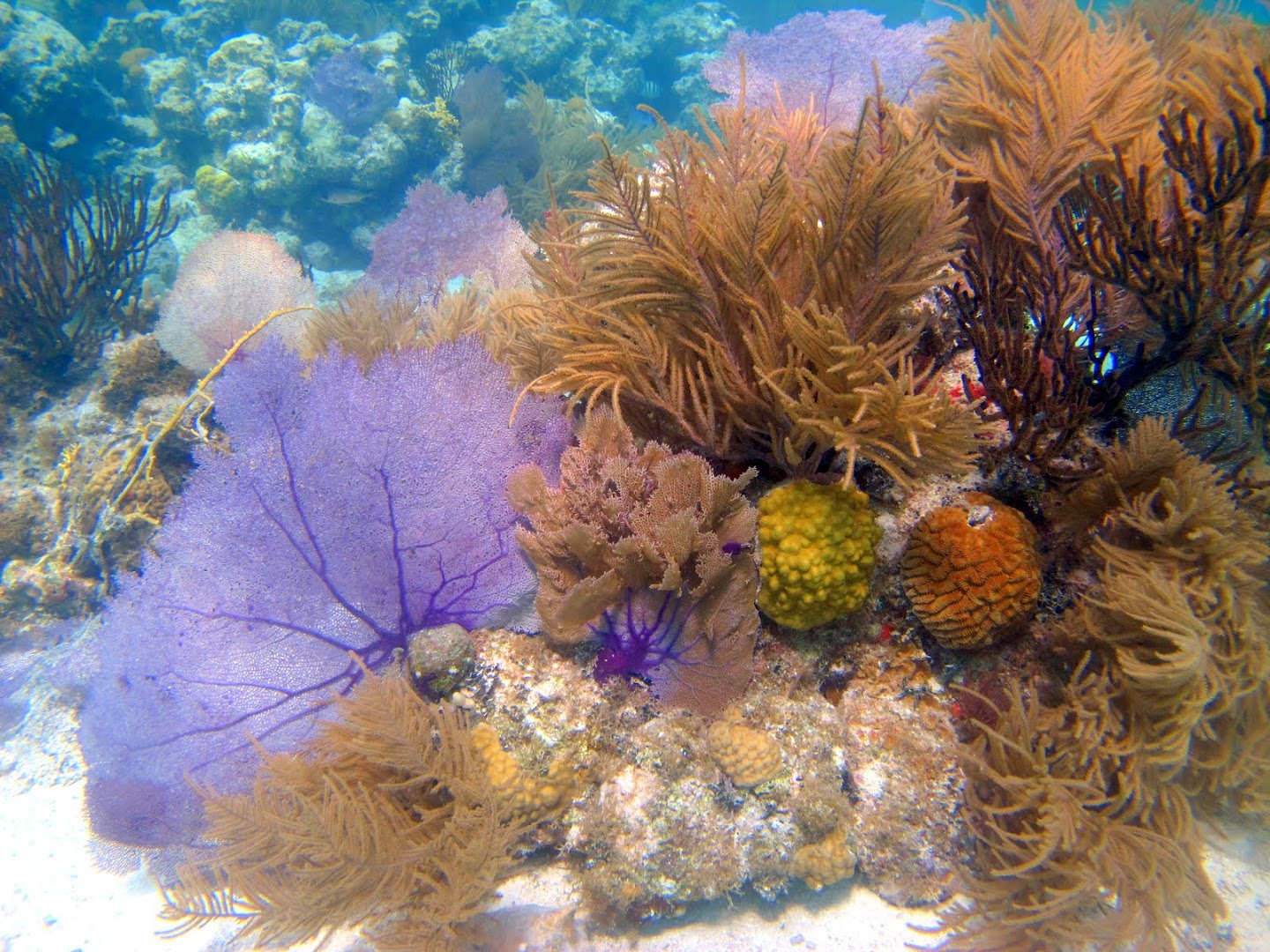 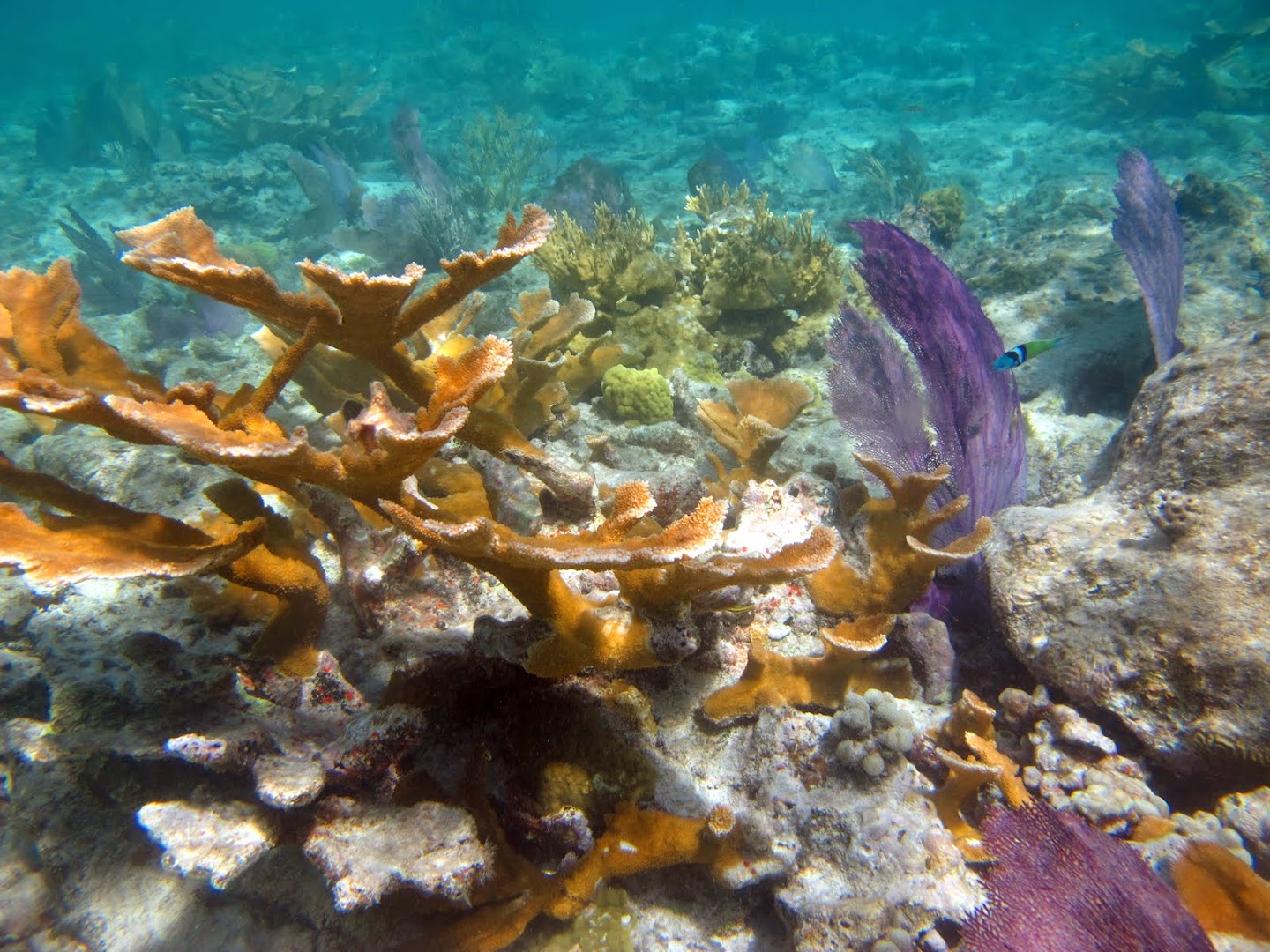 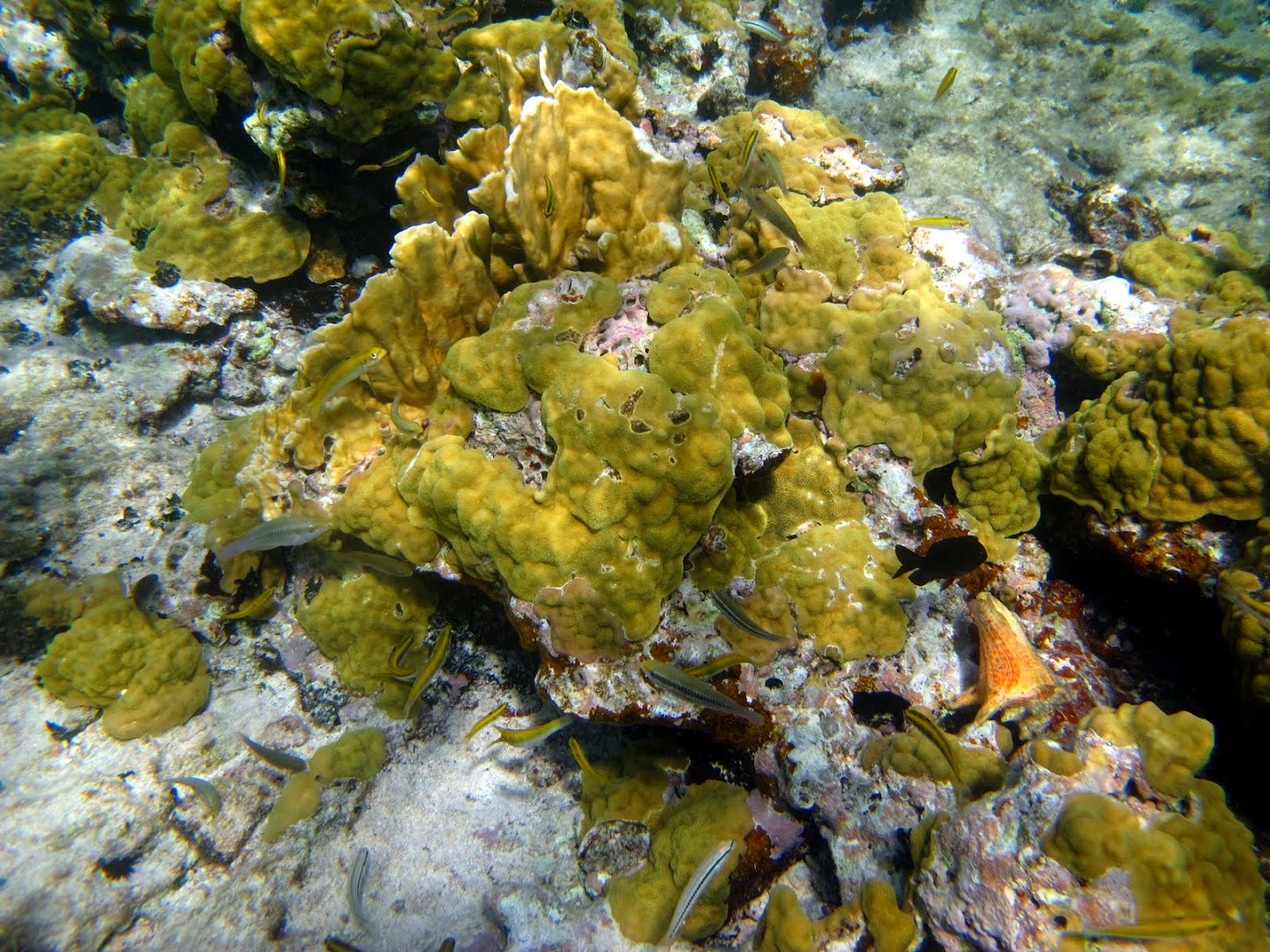 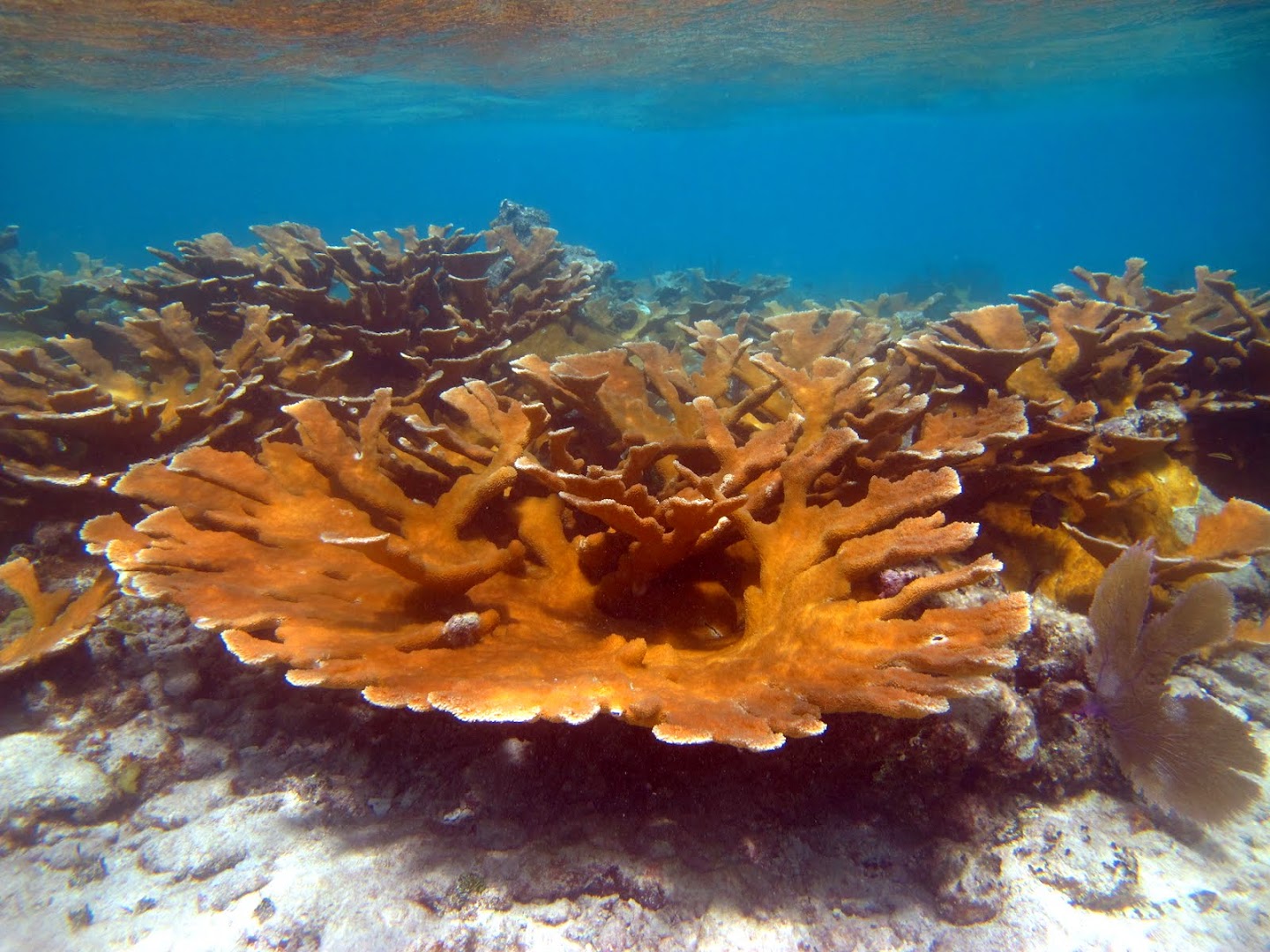 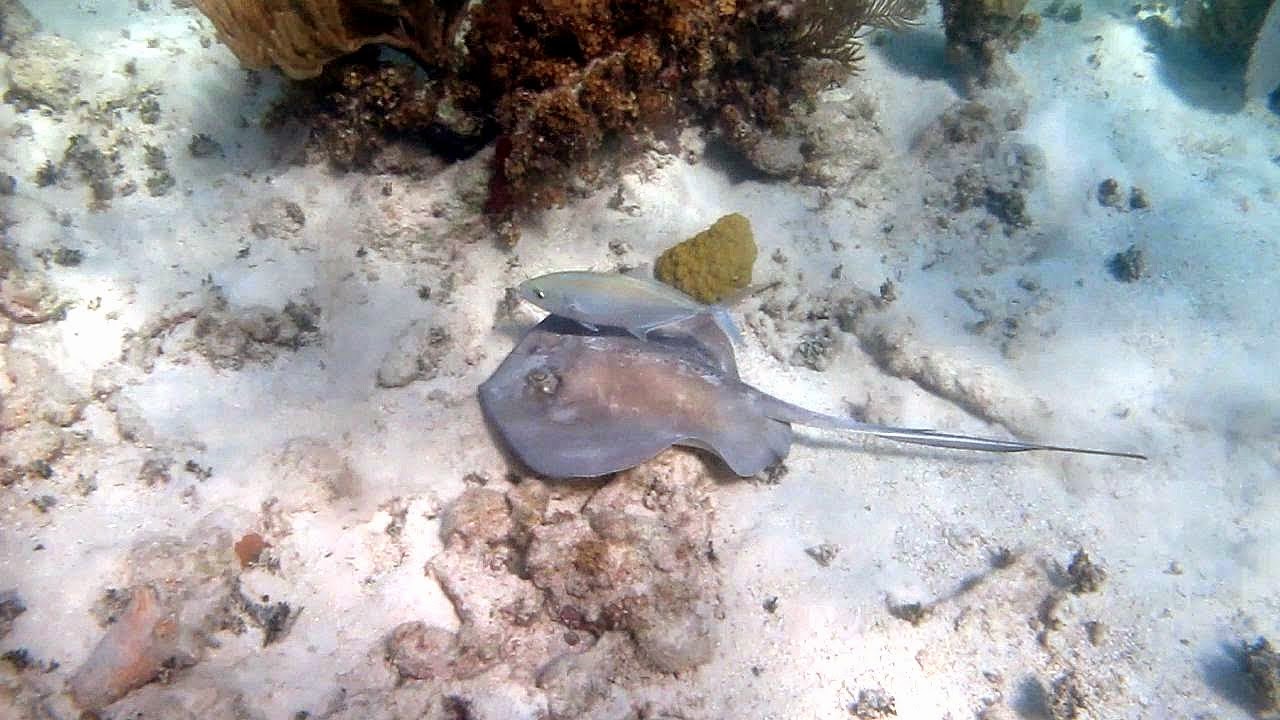 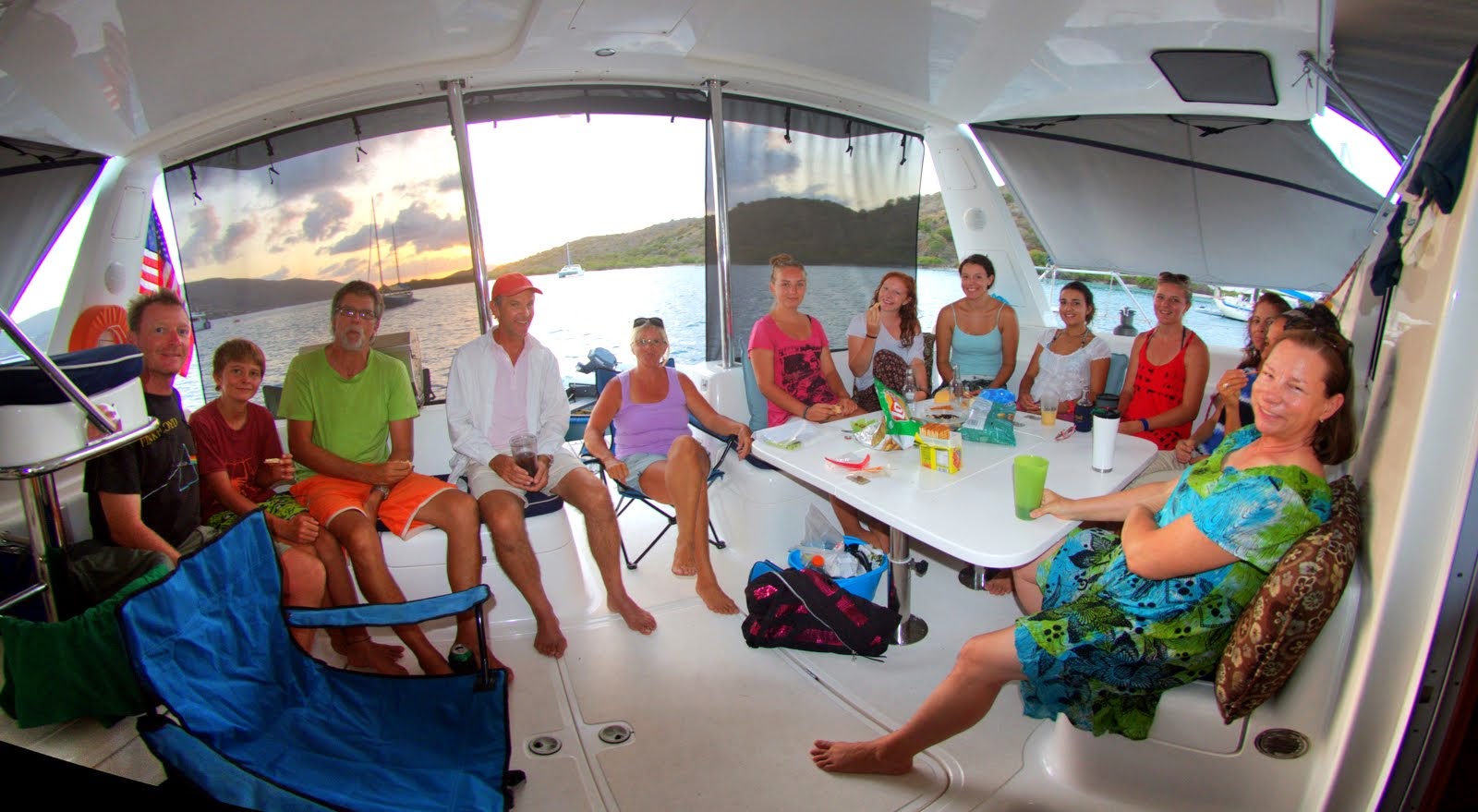 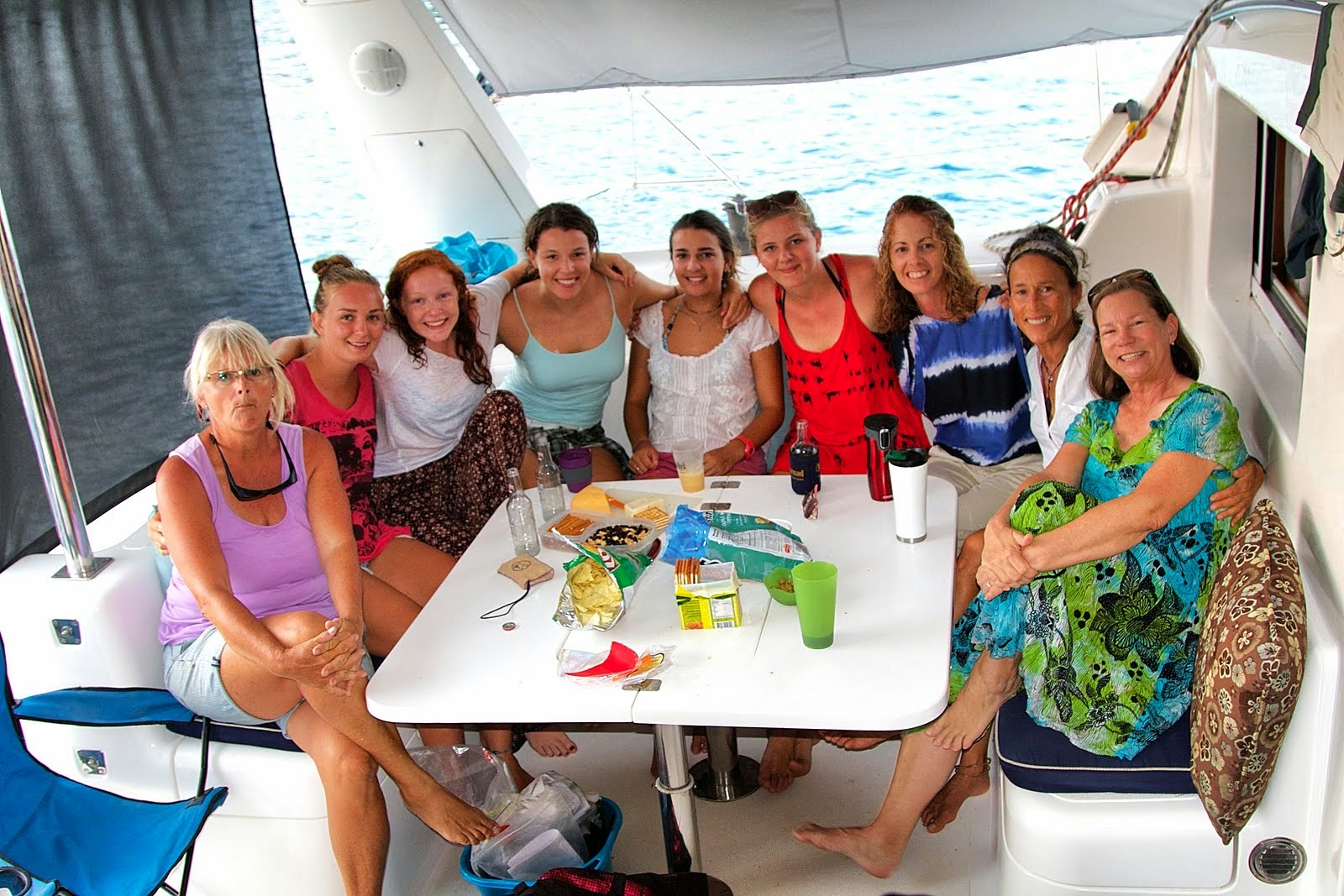 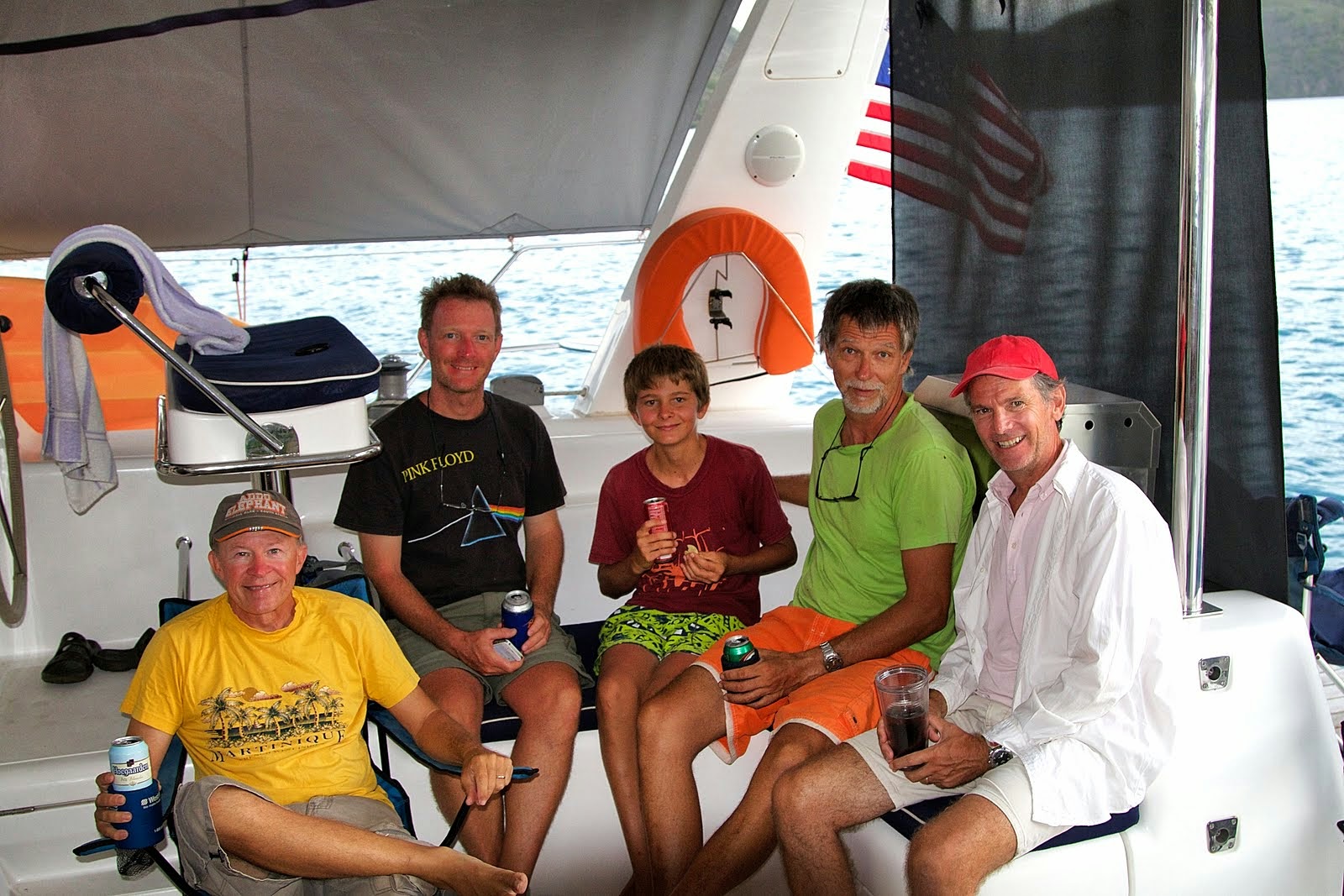 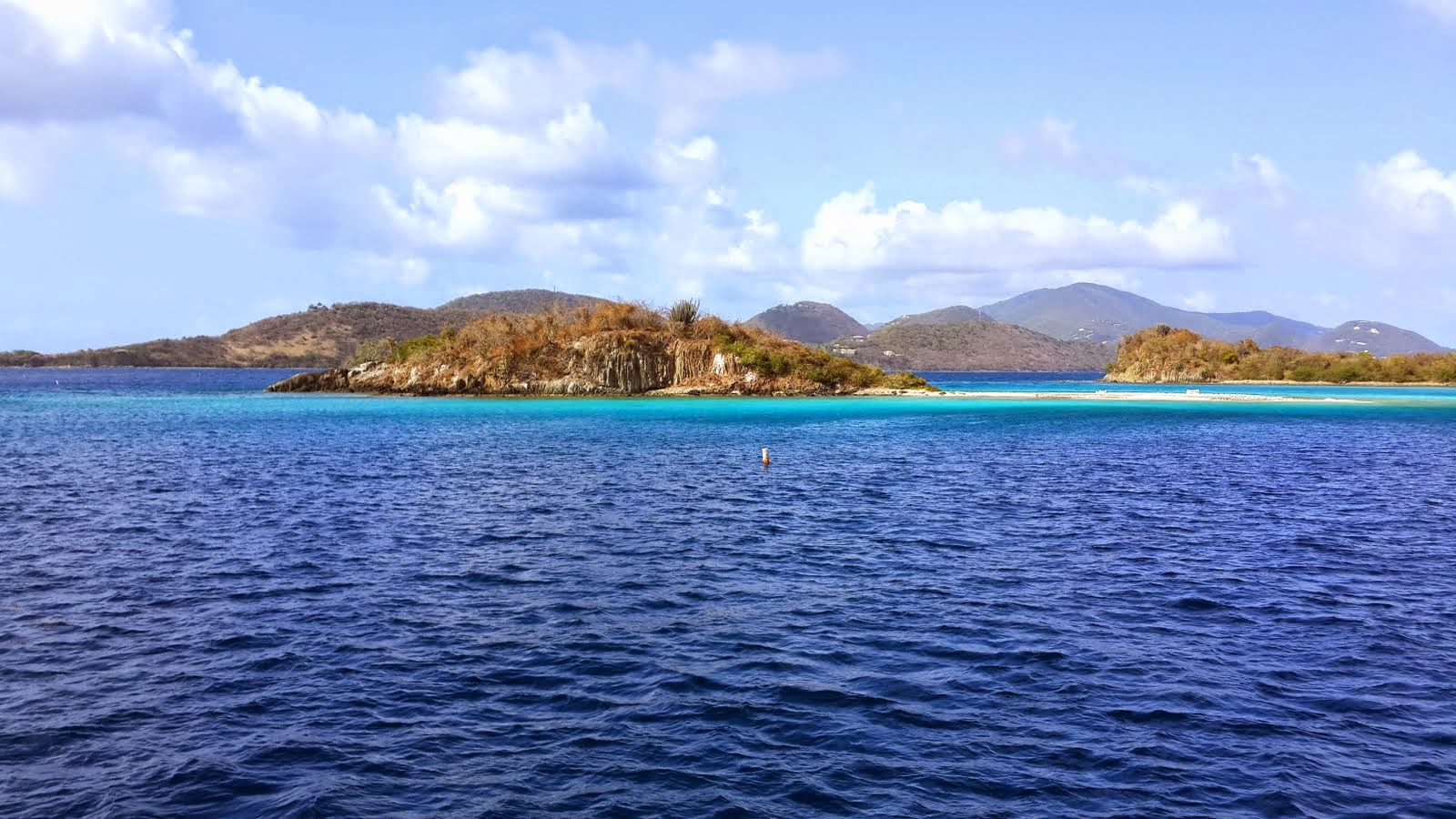 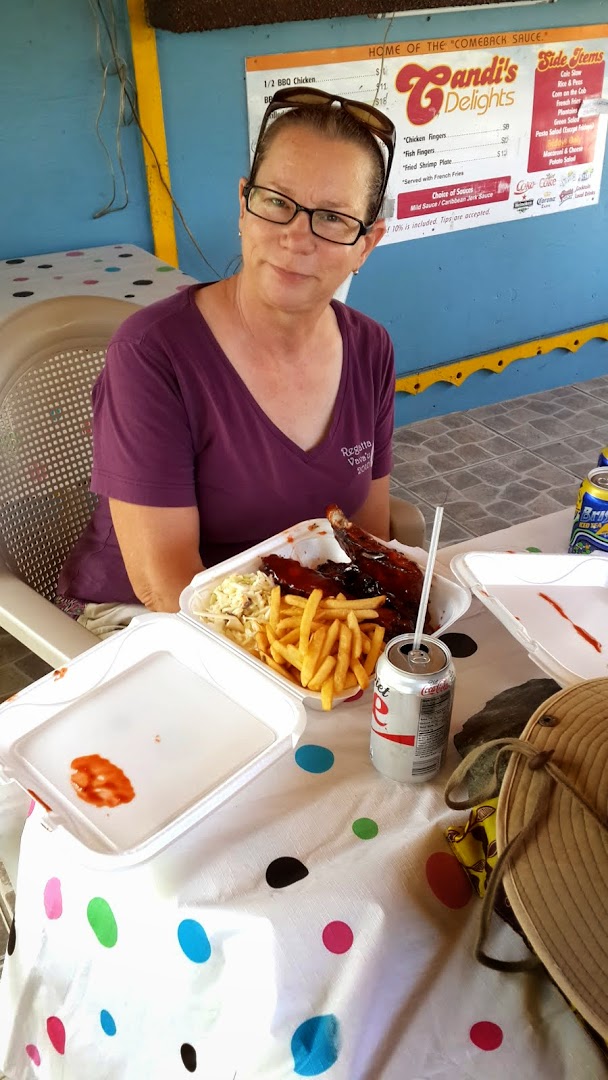 We finally left early afternoon planning to sail to St. Thomas to meet up with Wild Goose. We were setting up the sails and Karen was putting away the mooring lines we had used. I asked her to loosen the topping lift at the mast since she was up there. In the process of releasing the topping lift, her finger got caught in the line on the winch. Yikes! I ran up to see if I could help, but it was not possible to unwrap. I had to run back inside to grab a knife, and of course my usual knife wasn’t where I almost always put it. So, I grabbed another knife and cut the line and released her finger. She was a bit in shock, and we could tell her finger was hurt with a couple of bleeding lacerations and a worry it might be broken. So, we changed plans to sail to the main port of St. Thomas of Charlotte Amalie where they have at least one hospital.

An hour and a half later, I dropped the sails and got us in the anchorage and set the anchor. Then we quickly got ready and I dropped the dinghy in the water and took her to the nearby marina dinghy dock. We started out looking for a taxi, but saw the hospital was only a few blocks away so we just walked.

Welcome back to American healthcare. We ended up waiting almost 4 hours before we saw a doctor in an emergency room that was staffed with only one doctor and one assistant, but had plenty of not very busy nurses and other staff. They did manage to get her xray done while we waited, but never even offered an aspirin for her pain. When we finally saw them, they said she had a micro fracture and that the lacerations didn’t need treatment. They gave her a prescription for anti-biotics, and a splint. The bill (which is not the final bill they said) was $650. That’s way more than it would have cost in almost any other country we visited. In fact, many wouldn’t have charged anything and the wait would have been far less. Anyway, 5 hours later we left the hospital after waiting 20 minutes for a $10 taxi to take us the 3 blocks back to the dinghy dock.

Anyway, the good news is that it was only a minor fracture. She’ll have to endure a few days of a large splint on her middle finger, and jokes about holding her middle finger up a lot. It’s also a little awkward sleeping.

The next day, we watched the big cruise ships arriving only a couple hundred meters away. Ultrawide pano below shows a third one arriving. I got an early morning visit from our friend Randy of s/v Mystic. He and Jenny have been anchored here for a few weeks after sailing straight from South Africa to the USVIs. They wanted to get jobs and replenish their cruising kitty, so the USVI was the closest spot they could get jobs without hassles. Randy is a refrigeration mechanic, so he found employment easy. Jenny is working at a restaurant for now. We made plans to meet up at her restaurant in the evening.

During the day, Karen and I went ashore to check out the grocery stores and get her prescription filled. Then we went back to the boat and relaxed doing Internet and calling with our US phone a bit. Later we went to dinner and had a great time catching up with Mystic. After dinner, we decided we wanted to try to go see the new Avengers 2 movie at a nearby theater. We made it in time and had a fun time in 3D watching the movie. It was a late night for us as we didn’t get back by taxi until after 11PM.

On Thursday morning, I went to get a haircut and got another load of drinks from the grocery store. Then we raised the hook and moved Tahina 4 miles to a little bay called Druif Bay that is a cruiser hangout. s/v Wild Goose was there. Karen was feeling a little tired (she didn’t sleep well with the finger after the movie). So, I went over and we talked about plans for heading back to NC. It turns out Wild Goose has decided they need to get home sooner, so they are going to take a fast paced route home. So, we are only going to get a few days with them before we split up.

Heard from our friends on s/v Salty Ginger and s/v Gromit that they arrived in the afternoon to Charlotte Amalie (where we just left). We’re planning to get them to move over here to Druif tomorrow.

Late in the day, we invited Hugh and Lina of Wild Goose to come over to Tahina for sun downers. They finally got to see Tahina for the first time, and we had a nice time sharing cruising stories. Then they convinced Karen and I to come shore to the new bar on the beach. They were having karaoke night – which is not our normal thing. But, it was mostly cruisers on shore and a fun crowd. Karen even went up and sang once! I didn’t want to hurt anyone’s ears, so I didn’t try. But, the drinks were good, and a fun crowd of cruisers.

We finally got back to the boat at 11PM again. But, we had fun!

1 Response to Scary Finger Incident and Move to St. Thomas